Child detainee on his way home after 7 years in Gitmo 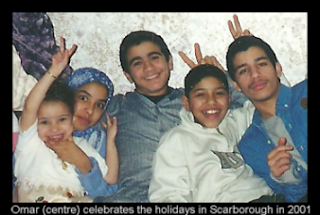 A child detained in Guantanamo Bay for seven years for allegedly throwing a hand grenade at US soldiers in Afghanistan when he was 14 years old is on his way home after a Federal Court ruled the U.S. government was holding him illegally. His initial confession, obtained under duress, was thrown out by the judge.
.
"We are so pleased that this nightmare of abuse and injustice has finally come to an end," said his attorney. "While he can never get back the nearly seven years he was illegally detained and tortured, now he can finally return home to his family, friends and country, and begin to build a normal life."
.
The child detainee in question is Mohammed Jawad, now returned to his native Afghanistan thanks to a US Federal Court decision this month. [Yeah, mean trick, I know]
.
Gosh, another kid accused of throwing a grenade. Is US military generally in the habit of accusing the survivors of their raids of throwing grenades, or only when there are US casualties and the possibility of friendly fire?
.
Meanwhile back in Canada, our child soldier detained in Guantanamo for seven years for allegedly throwing a grenade at US soldiers in Afghanistan when he was 15 - that's Omar Khadr pictured above in the middle the year before his father dumped him in Afghanistan - has not been so lucky because Prime Minister Stephen Harper is the last leader on the planet Earth to support the detaining and abuse of children in Gitmo.
.
On August 14, our Federal Court of Appeal upheld a lower court ruling that Ottawa is required to press the US for Khadr's repatriation because CSIS and Department of Foreign Affairs officials had violated his Charter rights by being complicit in his mistreatment at Gitmo.
.
Yesterday Harper's federal government disgraced itself by announcing it will go to the Supreme Court in a bid to overturn that ruling.
They do not want to risk asking the US for Khadr's return, perhaps because the Obama Administration urged a federal judge to order the release of Mohammed Jawad, and even George W. Bush granted requests by other countries for the repatriation of their citizens from Gitmo.
.
Harper is going to the wall in hopes that a sufficient number of Canadians believe in tiered citizenship and a four-tiered passport system and will applaud his stand against so-called 'activist' judges. He's wrong about that.
.
Posted by Alison at 12:51 am
Email ThisBlogThis!Share to TwitterShare to FacebookShare to Pinterest
Labels: Afghanistan, Bush, Charter rights, CSIS, Foreign Affairs, Guantanamo, Omar Khadr, Stephen Harper

And for some reason, the Harper government actually thinks that going to the Supreme Court is going do them favours, especially if they lose.

Even if they lose Harper is banking on there being a sufficient number of xenophobes and bigots who will be suitably impressed by his efforts .. and that the rest of us will not really care one way or the other.

I'm remembering Baird threatening that the Cons would go over the head of the GG directly to the people if she didn't prorogue. 'Activist judges appointed by Liberals' will be next.

I am sick, sick sick - about this, & about all of the regressive, repressive & reprehensible actions by this Congov. And this is when they only have a minority?! Thanks Allison! You're always right on top of things & I vicariously vent via your posts. (I also write a lot of letters - fat lota good that seems to do!)

The law's pretty clear. However, if right-wing pieces of shit really WANT governments to pick and choose which citizens they'll represent and defend, I'd be perfectly okay with consigning the Blogging Tories to diplomatic limbo should they find themselves in a torture chamber somewhere.

Isn't that the Canada they're trying to create?