Iggy and Steve - Standing up for Canadians 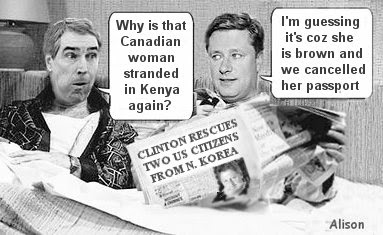 .
On her way back to Canada over two months ago, 31 year old Toronto single mother Suaad Hagi Mohamud got stopped at the Nairobi airport because they said her four year old Canadian passport picture didn't look enough like her : her lips were thinner. Charged with identity fraud, she went to jail for eight days and has been stranded in a motel awaiting trial ever since.

The High Commission of Canada in Nairobi sent a letter to Kenyan officials on May 28 that stated, "Please be advised that we have carried out conclusive investigations, including an interview, and have confirmed that the person brought to the Canadian High Commission on suspicion of being an impostor is not the rightful holder of the aforementioned Canadian passport."

After she showed a dozen Canadian ID cards, spent weeks persuading Canadian consular officials to take her fingerprints and won a federal court action to have them take her DNA, Foreign Affairs Minister Lawrence Cannon said she wasn't doing enough. "The individual has to be straightforward, has to let us know whether or not she is a Canadian citizen," Cannon told media after the federal court decision.

Nice one, Larry. She has to take the Canadian government to court to be permitted to prove her identity but you say she's not doing enough?

I've got a test you can try, Mr. Cannon. It just requires a webcam.
"Hey, 12 year old kid in Toronto, is this your mom?"
"Hey, ATS, is this the woman who currently works at your company as a supervisor ?"
.
Travelling abroad while brown - no longer recommended for Canadians.
And my apologies if I'm wrong, but I don't believe we've heard word one from human rights expert Michael Ignatieff about this.
h/t Dr. Dawg
.
Update : Suaad Hagi Mohamud - Vindicated by DNA test.
Will Lawrence Cannon, the Canadian consular services in Kenya, and Foreign Affairs Consular Services and Emergency Management Branch be held to account?

On two occasions, federal officials in Canada appeared to suggest Mohamud had switched identities with a sister. She has four half-sisters by the same father.

Yeah, the closest one to her age being 15 years older and living in Europe.
As with Arar and Abdelrazik, "rumours" are floated by "officials" in Canada to discredit the person abandoned by their government. It's appalling the government has to be taken to court to do its duty by Canadians. Utterly appalling.
.
Aug 15 Update : Iggy speaks!
.
Posted by Alison at 5:12 pm
Email ThisBlogThis!Share to TwitterShare to FacebookShare to Pinterest
Labels: Foreign Affairs, Iggy and Steve, Lawrence Cannon, Suaad Hagi Mohamud