Oil bidness you can believe in 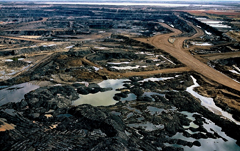 Then - June 2008 :
Obama's fight against 'dirty oil' :
"Barack Obama on Tuesday vowed he would break America's addiction to "dirty, dwindling, and dangerously expensive" oil if he is elected U.S. president -- and one of his first targets might well be Canada's oil sands.
.
"The amount of energy that you have to use to get that oil out of the ground is such that it actually creates a much greater impact on climate change, as well as using much more energy than even traditional petroleum," he said."
.
The extraction of a barrel of crude from oil sands is estimated to generate as much as five times more greenhouse gas emissions as from a barrel of conventional crude.
.
Now : Aug 21, 2009 :
Washington approves oil-sands pipeline :
"The Obama administration yesterday approved a pipeline to carry oil-sands fuel from Canada into the US, saying its action was designed to send "a positive economic signal in a difficult economic period".
Many environmentalists had expressed hopes that Hillary Clinton, secretary of state, would reject a permit to build the Alberta Clipper, a 1,000-mile pipeline designed to carry up to 800,000 barrels a day of fuel from Canada's vast oil sands. But the State Department said greenhouse-gas emissions are best addressed through each country's domestic policies and a strong international agreement.
After undertaking what it said was considerable evaluation, the US said it would permit Enbridge Energy to build the pipeline to advance a number of US strategic interests."
.
Bonus oil bidness from Rabble :
Alberta to cut acid-rain tests in oilsands region

"To reduce costs, Alberta will do less testing for acid rain in the northern oilsands region, Alberta Environment said Monday. The program has been in place since 1978, and the sampling and testing had previously been done once a week."

Ties right into the Enbridge Northern Gateway pipeline project I've been trying to bring attention to among the lower coastal residents- the issue seems to be that there really isn't a written document labelled 'Moratorium' because they didn't think to write anything down back in the day,it has always been agreed upon. I have all the details under RossK's post on http://pacificgazette.blogspot.com/, where he takes a look at these two posts of yours. That pipeline will be the beginning of very frequent super oiltanker traffic along our pristine coastline.

So sad that so many people down here are still completely clueless to what is going on, but then again,the local MSM papers have a lot to do with that.

Thanks, Laila - added your links.

Amazing that this is still being considered, given Enbridge's record of hundreds of leaks and pipeline bursts in just the last couple of years :
2007 and 2008

And how's their pipeline from Alberta to Chicago going?
$1.1 million to settle a lawsuit brought against the company by the state of Wisconsin for 545 environmental violations to streams and wetlands throughout Wisconsin watersheds.
$1.1 million : just the cost of doing business.

The National Energy Board once had a page on Enbridge Pipeline Rupture Data. It is now 404'd.