The Emperor Strikes Back 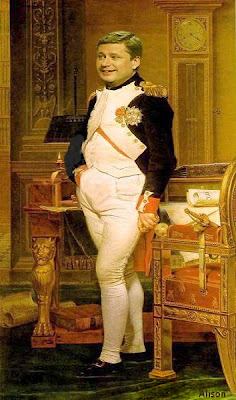 What is Emperor Steve fooling around with in his pocket this time?
.
Oooh - it's the nine new Senators he appointed yesterday.
That makes 27 Cons he's appointed in less than a year, bringing his posse in the Senate up to 46 out 0f 105 senators.
.
G&M : "At an event in Quebec City, the Prime Minister said he had to nominate unelected Conservative supporters to the Senate to ensure that his government, which won a minority last year, gets its legislation approved."
.
There's some Con Party presidents and backroom operatives and Steve's communications aide from the PMO among the unelected ... plus a hockey analyst who remarked yesterday that his appointment meant he was "going to have to start following [federal politics]" now.
.
Three Liberals and one independent are due to resign in coming months, presumbly meaning four more unelected Consenators to enable the party with 22+% of the vote to push their reformy crap through the Senate, but unfortunately we also learned yesterday from the Libs that "Canadians aren't clamouring for an election".
.
Today Steve appointed former NDP Manitoba premier and NASCO enthusiast Gary Doer to be our new US ambassador.
No, not NASCAR - NASCO : North American SuperCorridor Coalition - the apparently imaginary yet somehow ubiquitous NAFTA Superhighway supporters.
Doer gave the keynote address at NASCO last year and here he is plumping it in his 2007 Manitoba Throne Speech :

Canadian Corridor Ambassador to the US? He's been ready with that shovel for years.
.
Posted by Alison at 12:24 pm
Email ThisBlogThis!Share to TwitterShare to FacebookShare to Pinterest
Labels: Gary Doer, NAFTA Superhighway, Senate, Stephen Harper, US ambassador

I don't like it when politicins from whatever party play games.
The day before this US job announcement, Doer had no mention of it. He said he had many options.