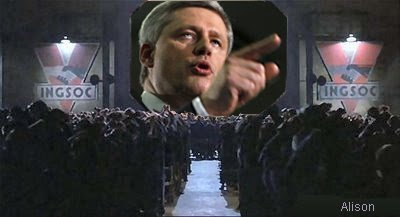 With subtle strokes of the pen, it appears the Conservative government has been systematically changing the language employed by the foreign service and, as a result, bringing subtle but sweeping changes to traditional Canadian foreign policy.

In an email communication obtained by Embassy, staff at the Department of Foreign Affairs express concern about frequent changes being made to commonly used terms, particularly where such changes are not consistent with accepted Canadian policy.

Rewriting Canadian foreign policy without going through parliament.
"International humanitarian law" has been replaced by "international law"
WTF?
IHL is about Geneva Conventions : war, casualties, the limiting thereof.
Take out "humanitarian" and we're talking the laws of the sea, trade law, border stuff.
No humans rights or massacred civilians here. Take that, International Criminal Court! You too, UN.
Doubtless our partners in the Canada-Israel Homeland Security pact will be gratified to learn of our new position on human rights in occupied territoriesopen air prisons.

In fact, a source close to Foreign Affairs told Embassy that the Prime Minister's Office had once tried to change Canada's official position on the ICC to essentially state that Canada does not support the ICC, it tolerates it.

"Gender equality" is now "equality of men and women"
What are we talking here - height? Number of arms and legs?
Back in the 90s we figured out that sex is biological; gender is both political and socially constructed and gender-based violence is not just about your junk.
"References to gender-based violence are removed," the Foreign Affairs email states, muttering darkly about the influence of certain conservative women's groups. Hi, Gwen!
Canada, previously a pioneer in the fight to bring gender equality into the human rights agenda, is apparently back to cocks and cunts.
"Child soldiers" is now "children in armed conflict."
We're obviously talking toddlers in swaddlin' clothes here and we are most definitely not talking child soldier Omar Khadr. Again, Canada pioneered protection for child soldiers in international humanitarian law at the UN, but that was before we became the last government on planet Earth to offer our passive support to what goes on in Gitmo.
Go read.
Foreign Affairs is pushing back. Good for them.
.
h/t Waterbaby
.
Posted by Alison at 6:37 am
Email ThisBlogThis!Share to TwitterShare to FacebookShare to Pinterest
Labels: Canada's foreign policy, child soldiers, Foreign Affairs, gender, Omar Khadr, United Nations

great photo of Hitler AKA Harper

I remember when USA waged war on poor old aghanistan, harper wanted in on the action

seems he wants to fuck with some more countries as well as our rights, freedoms and democracy...

he is in on the new world order, the bildaberg group and actually believes some ragheads in caves took down the twin towers (no offence to my beloved brothers in the east, just expressing Harper's perspective, not mine)

thanks for posting
peace
out
j

Excellent post. This is what happens when you have 24-year-olds running the country.
Iggy, save us!

My ex brother in law is working on some of this stuff for the military. He has Asperger syndrome and PSTD which he is keeping secret from his superiors. What a perfect candidate for rewriting the policies of this country. Why are all these sociopathic types doing in positions of power?