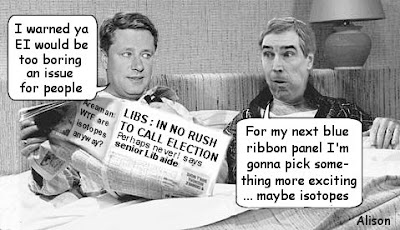 Liberals say they're in no rush to force fall election

"We're not having an election on EI," said Senator David Smith. ``I don't hear Canadians clamouring for an election on this issue."
Prime Minister Stephen Harper and Liberal Leader Michael Ignatieff agreed to strike the panel [on Employment Insurance] last June as part of an eleventh-hour deal to avert a summer election.

"So it turns out that our last set of confidence threats involved an issue that we don't think matters enough to be worth an election. But that's just as well, since we've been doing a lousy job of laying the groundwork for one anyway."

Yo! Iggy! 101 Reasons to Have an Election
.
Posted by Alison at 6:58 pm
Email ThisBlogThis!Share to TwitterShare to FacebookShare to Pinterest
Labels: ConservaLiberals, employment insurance, Iggy and Steve

Reading back through the 101 Reasons gave me indigestion.

Question is: Would an iggy gov't be that much different than harper's? If so, where's the evidence? Thus far, iggy's talked tough and then enabled stevie to rock along . . . .