$13-million an hour for three days 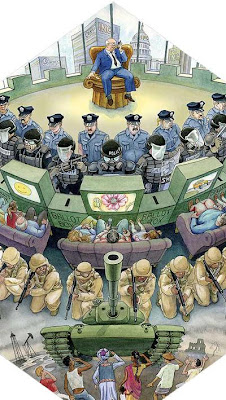 That's the security budget for Steve's upcoming billion dollar bunfest.
Could go even higher says Public Safety Minister Vic Toews.
.
Originally pitched to us at $179-million, the cost of G8/G20 security is now creeping up to a billion dollars.
.
"I understand that the Liberals don't believe in securing Canadians or the visitors here," Toews told the House yesterday. "We're different."
.
How different are they?
Well, by comparison, an hour and a half's worth of our security budget this time round would have paid for the entire security bill for the G20 summit in Pittsburgh in 2009, which clocked in at $18-million US.
An hour and a half's worth.
But then the US has never been all that concerned about security, have they?
.
Bonus BS : For the G20 portion of the show, Toronto will be locked down, the CN Tower will be closed, and the Toronto Blue Jays will have to play in Philadelphia. Nothing is too much trouble to protect our safety.
.
Bonus irony : Among the list of topics at the billion dollar bunfests will be how to battle poverty and get government spending under control.
.
Posted by Alison at 1:47 am
Email ThisBlogThis!Share to TwitterShare to FacebookShare to Pinterest
Labels: bunfest, G20, G8, security theatre, Toews

I get your point, but I don't find that "bonus irony" much of a bonus!

The bonus irony is the kind of thing that makes me tear my hair out.

Kinda makes one wonder how well the harpercons are at managing $$ and "limited government," doesn't it ? ? ? ?