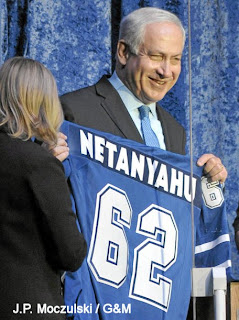 Hours after Israeli Prime Minister Netanyahu was presented with this Toronto Maple Leafs jersey in Toronto, Israeli commandos dropped from helicopters onto the lead vessel of a six ship international aid flotilla bound for Gaza and opened fire.

Israeli Radio is reporting 16 to 19 killed with 30 injured and confirms the flotilla was in international waters.

According to AFP, "the Israeli military censor ordered a block on all information regarding those injured or killed during the storming of the ship."

The six ships bearing 10,000 tons of supplies and over 600 activists from 40 countries, including 86 year old Holocaust survivor Hedy Epstein and Nobel Peace Prize laureate Mairead Corrigan Maguire of Northern Ireland, are now being towed to Ashod.

I was watching a Turkish TV live feed from the lead vessel until it went off the air. I couldn't understand what anyone was saying except for a voice shouting in English that they were in international waters and a woman calling for help for the wounded. The live footage is now being rebroadcast at the same link with commentary in English.

But back to the jersey photo op. Netanyahu says Israel has never had a better friend than Canada and thanked Steve today for being "an unwavering friend of Israel."

Too true. Canada was the first country in the world to boycott Gaza for electing Hamas. When Israel bombed Lebanon in 2008 killing 1400, Steve called Israel's actions "measured". A Canadian killed when Israel shelled UN offices went unremarked by our government. We support the Wall at the UN. Peter Kent, Minister of State for Foreign Affairs, has more than once stated on his website that "an attack on Israel would be considered an attack on Canada." We have cut off funding to humanitarian groups like Kairos and UNRWA who have been sympathetic to the plight of the Palestinians, and replaced members on the board of the once independent group Rights and Democracy with pro-Israel hawks. Canada had the largest delegation at last year's Conference on Anti-Semitism in Israel and provides nearly twice the Canadian forces to man the borders of Gaza as does the United States. We have our own McCarthyite Canadian Parliamentary Coalition to Combat Antisemitism and banned George Galloway from Canada. Con MPs have sent out flyers to their constituents suggesting that Liberals are soft on anti-Semitism, the definition of which has now been expanded to include any criticism of Israel, following the lead of our prime minister who has accused MPs of anti-Semitism in the House of Commons. Last month the Ethics Commissioner reported that Israel is the top destination of choice for MPs seeking junkets abroad paid for by outside organizations, and Ontario Premier McGuinty is there now drumming up trade. Two years ago Israel and Canada signed what it pleases Israel's Ministry of Public Security to describe on their website as a pact on "cooperation in home land security and counter terrorism issues."

Against this complicity by our own government in the three-year-old Israeli blockade of Gaza, we must raise our voices in support of international law. We must no longer allow our government to speak in our name here.

That must have been difficult to manage given there were no weapons allowed on the flotilla.

I am just disgusted.

Another link for you with updates
http://smpalestine.com/2010/05/31/flotilla-update-immediate-post-attack/

Thanks, Chris.
Sixteen Minutes to Palestine

The "came under fire" claim is irrelevant even if true. The ship was in international waters, sixty miles away from the self-proclaimed Israeli blockade zone, which itself probably violates international law. You don't have to be an American Second Amendment nut to know that an illegal attack can be met with any appropriate force in response, and it is the attackers who are guilty, not those who resist them.