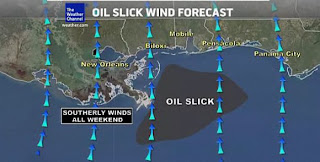 In Australia last year a massive blowout caused a rig to catch on fire and spew thousands of gallons into the sea for ten weeks.

At a hearing into the accident, the federal U.S. Minerals Management Service faulted the work of Halliburton's cement workers for failing to properly pump cement into the well.

According to a 2007 study by the same Minerals Management Service, out of 39 rig blowouts they studied in the Gulf of Mexico between 1992 and 2006, cementing was a contributing factor in 18 of the incidents.

"In a statement, Halliburton said workers had finished a cementing operation 20 hours before the rig went up in flames. But the company said it was "premature and irresponsible to speculate" on what caused the disaster.

BP profit in the first quarter of 2010 : $5.6 billion
Cost of the acoustic switch to shut off rig blow-outs that BP has to use in the rest of the world but not in the US : $500,000.
.
Posted by Alison at 9:59 am
Email ThisBlogThis!Share to TwitterShare to FacebookShare to Pinterest
Labels: BP, Halliburton, oil bidness

In other countries like Brazil and Norway it's this secondary emergency shut off valve that's required.

Not having redundant safety is clearly insane.