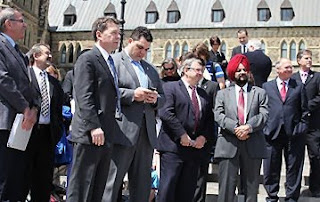 Oooooh... All those suits! How exciting! Men telling women what to do with their bodies.

Thanks for the List, Alison! Just to personalize them a little.... The one woman I see, Kelly Block, is a Sk rural Con MP who supports laws to allow children to be spanked - "cause the Bible says so"! She one of the little Stepgod wives. Trost & slimy Vellacott are also both from Sk. & are responsible for starting a prolife petition last year, via their religious right shite, lifesite. They're long know fetus fetisists & truly creepy twits. I'm printing out the entire list, so I remember the grand patriarchs of holydom. ARghghghg!!!!!

Dean Del Maestro wants to have a dignified grown-up discussion about how life begins at conception.

CanNurse, you sure know how to depress a SK grrl! :(

Video is under a minute and 3 years old; further evidence Harpercons do plan to revisit the abortion issue, to more than likely criminalize it again.

So there's one woman in that sorry assed group of amateur obstetricians?

If she's not deeply ashamed and embarrassed she should be. Perhaps a few hundred thousand letters, calls and emails from women might do the trick.

Yet they never protest war and occupation.
All "life is precious" but apparently some lives are more "precious" than others.
Hypocrites.

In the Old Testament, God never performs any abortions, but he DOES kill a whole sh*tload of people.

Guess that's the example they're following.
.