Workers of the World - Untie! 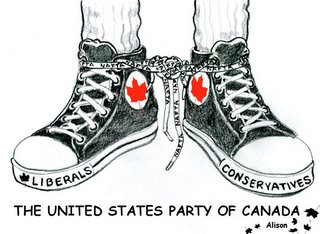 Thanks to the above for all their work this year on the 'Task Force on the Future of North America'. We are especially grateful for these recommendations:

and also for this quote:

"Governance has not kept pace with economic realities and is preventing further integration."

Posted by Alison at 12:28 am
Email ThisBlogThis!Share to TwitterShare to FacebookShare to Pinterest

Name those whores! And where was the CBC coverage?
You should have mentioned that the Libs later signed off on this wholesale in the SPP. Check out the Council of Canadians website. So much for Martin's election I-love-Canada patriotism.

Vote Green, vote NDP, vote CAP.
Strategic voting this time means voting for anybody but these lying fuckchops.
OK, anybody but Sockpuppet.

Dinning and D'Aquino don't surprse me, but what the fuck is Manley doing in that bunch of treasonous losers.