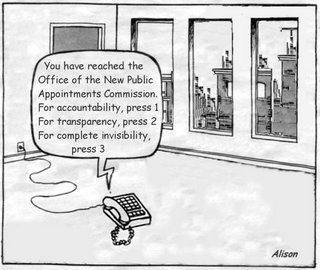 in which Harper throws a hissy and goes home.
Posted by Alison at 3:56 am
Email ThisBlogThis!Share to TwitterShare to FacebookShare to Pinterest

Reading that CTV pablum I was overcome by deja-vu all over again, not because of the substance of the issue, but rather because of the emergence of a top-tier Republican talking point. Specifically, if anything happens that you don't like blame the outcome on 'partisan politics'.

We are being led down a very dangerous road here, and they are fitting us for larger and blacker blinders with each twist and turn.

Good observation, Gazetteer: the use of US neocon framing words (codes, many designed by Frank Luntz) is disturbing. And the only way to combat this is to be diligent, and call them on their use, each and every time, just as you have. Consider yourself an honourable member of the DWL Brigade*.

i read the cbc pablum and howled. i tried to eat some of it with a home made wooden spoon, but even then one mouthful had to be spat out. if the general public is really eating this garb perhaps they should check the ingredients on the packaging....seems to me i saw a sign that said 'toxic'.

Nothing surprises me with this bunch.

Tonight in the Afghanistan debate, the PM said he will extend for a year if parliament says no in the vote.

The Cons certainly learned a thing or two from the Liberal government.

I choose 3. I've always wanted to be invisible.