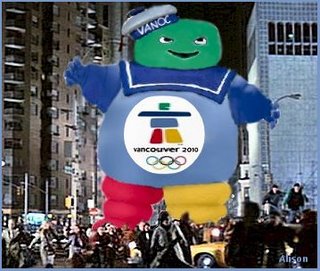 VANOC has squeegeed another 110 million from BC and the feds.
BC's Auditor General responded this week by suggesting the province buy itself a watchdog.
Obligingly, VANOC obtained one itself on Thursday and has decided to name it "Performance and Accountability Agreement", or "Good Dog!" for short.

The total projected Five Ring Circus budget now stands at 2.5 billion.
That's such a big number, it's hard to even imagine.
I find it helps to think of it as being five times what these were worth.
Posted by Alison at 2:34 am
Email ThisBlogThis!Share to TwitterShare to FacebookShare to Pinterest
Labels: Five Ring Circus

Gozer the Gozerian has taken on some truly disturbing forms but this is the most cruel yet.