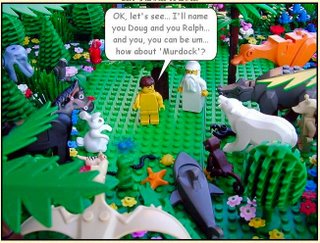 1:26 And God said, Let us make man in our image, after our likeness: and let them have dominion over the fish of the sea, and over the fowl of the air, and over the cattle, and over all the earth, and over every creeping thing that creepeth upon the earth.

Well, so much for the biblical position on the environment.

But speaking of creeping things, Public Eye Online reports that Darrel Reid, former President of "Focus on the Family" and former Chief of Staff for the Reform Party, has just been named Rona Ambrose' Chief of Staff. Although his anti-SSM, anti-abortion, anti-evolution, anti-stem cell research opinions were deemed too fuckwitted to get him elected to office in Richmond in the last election, there is evidently a home for them in the Ministry of the Environment.

Says Dr Reid : "I think every Christian's under an obligation to change laws to reflect biblical values."

Sure. Whatever.
I think we can all guess what God's position on the sacredness of the Alberta oil sands is going to be. And it seems unlikely that God's love for the little sparrow will be extended to the 17 remaining spotted owls in BC any time soon.
But this is just a patronage position for Dr Reid, right?
It's not exactly the inauguration of the Ministry of the Environment - End Times Division.

In an offline email, Corinne from YaYaCanada is not so sure and she provides this link to Marci McDonald's article in The Walrus Magazine - Stephen Harper and The Theo-Cons.

Picture courtesy of The Brick Testament.
Posted by Alison at 5:53 pm
Email ThisBlogThis!Share to TwitterShare to FacebookShare to Pinterest
Labels: Evolution

... and people wonder why I keep arguing that HarperCrit isn't being honest with Canadians?

For balance, I should direct you to Paul Well's less than favourable review of McDonald's article, if you haven't read it yet.

Creepy and outrageous that this nut who believes Murdock and Ralph lived together 5000 years ago defying the space time continuum and reality as sane people know it, is now in a government department that should be all about real science.
As always, the lego demonstration is an indispensable aid for me. Well done.

is EVERYONE waiting till a new lib leader is elected.....where's the protest marches?

According to a diary at Daily Kos a scan of the comments on the Foley scandal from the US religious right organizations amounts to the following. http://www.dailykos.com/storyonly/2006/10/1/144036/652

One must necessarily draw the conclusion that for all the high and mighty talk spewing from these groups on a daily basis, the primary mission (pun intended) is primarily political in nature. None other than Pat Robertson makes that point abundantly clear. Religion is used solely as an expedient means to an end...POWER."

On subject for a second...

But beside that, on the subject of the spotted owls. Personally, I'd like to see them hang around for a while, they are pretty. However, from an evolutionary point of view, extinctions happen all the time - a result of changing climates and ecosystems, evolutionary niches being invaded by other animals, etc. This is the order of life. Why get up in arms about an extinction? If they can't adapt, they die - this is the law of evolution. Less adaptable species make way for more adaptable. I never understood that logic.