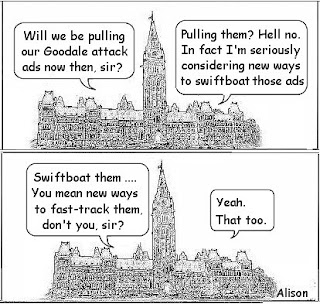 Reuters :
"Canadian police concluded a probe into a 2005 income trust scandal on Thursday without charging any Liberal politicians even though the scandal contributed to that party's electoral defeat last year.
The RCMP said it is charging only one person -- a senior civil servant in the Finance Department -- as a result of its investigation.
The governing Conservative Party, while in opposition, had accused the then Liberal finance minister, Ralph Goodale, and his office of directly leaking information to investors of an imminent tax policy announcement regarding income trusts, allowing the investors to make tidy profits.
"If Mr. Goodale wants an apology, he should go to the RCMP and ask them whether they're still investigating him and ask if this is a conclusion," said Finance Minister Jim Flaherty."
Good idea, Jim.
Because if, in his capacity as general director of analysis at the tax policy branch of the Department of Finance up until Wednesday, Serge Nadeau made a single illicit dime on the Cons watch in the last year, well then I guess it's only fair if we paint the entire Con party as corrupt, right?
Posted by Alison at 8:21 am
Email ThisBlogThis!Share to TwitterShare to FacebookShare to Pinterest

It's hardly 'swiftboating' when both opposition parties of the time claimed there was evidence of wrong doing and it turns out they were right.

Swiftboating, anon, is when you attack your opponent's strongest suit with lies, and Goodale's strongest suit is his honesty.
That the ads continue to run after he was cleared? You're right - that's not swiftboating anymore - it's a straight-up smear campaign.