In May 2003, George stood on the helicopter deck of the USS Abraham Lincoln and pronounced the invasion of Iraq a success - just as the guerilla war turned deadly.

No one believed him. 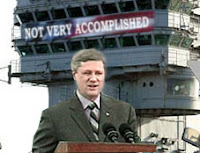 On Thursday, Steve stood on helicopter deck of the HMCS Halifax and announced a $3.1B military upgrade for the navy.

He has stated his willingness to leave Afghanistan in 2009 as long as there is a Con sensus.
No one believes him either.
H/T Impolitical
Posted by Alison at 6:57 am
Email ThisBlogThis!Share to TwitterShare to FacebookShare to Pinterest
Labels: Afghanistan

And to add to that, the upgrade for those frigates was approved back in 2005, under Paul Martin.

I'm glad I'm not the only one who sees Stevie's consensus line on Afghanistan as a lie.

Excellent post and PhotoShopping, Alison. (Or was that second one an actual photo? :) )