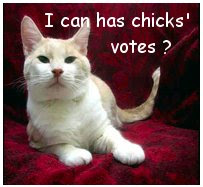 
You'll remember of course when pictures of a kinder gentler Steve playing with kittens first appeared on the official Government of Canada website, extolling the virtues of fostering pets. It's a worthy cause and I was pleased to see the Prime Minister take time out from his busy schedule of dismantling Canada to lend it his support.

Now, presumably in a bid to counteract that Strategic Council poll showing Steve to be trolling a lowly 26% among women in Canada, cute cat pictures are getting a higher profile with their own Adopt-A-Pet page.

We look forward to the official Government of Canada howtotellwhenhescheatingonyou.gc.ca page, the losetwentypoundswithoutdieting.gc.ca page, and of course that old standard, thebrazilianisitforyou?.gc.ca page.

Steve V at Far and Wide asks when all this kitty adoration is going to translate into some movement on two current animal cruelty bills that have been languishing in obscurity back in Ottawa. We've had numerous variations on these bills for ten years now. Surely there is some variation that the NRA, the Canadian Veterinary Association, the sealing lobby, and the medical researchers could live with that is enforceable. Other nations have managed it, you know.
Posted by Alison at 3:28 am
Email ThisBlogThis!Share to TwitterShare to FacebookShare to Pinterest
Labels: Lolcats, Steve

Yes, I noticed these photos and thought "WTF?" -- thanks for connecting the dots.

Nice! Now if he can just have that mean streak surgically removed it might not look like he's about to snap its neck.

He looks like a robot in so many pictures; the kitties don't help with that.

Steve can has too many cheezbrgrs.

Hey! Do you think, if they're giving the national SPCAs that kind of boost, they might pull together again the Criminal Code revision on extreme cruelty to animals that right-wingnuts have been sabotaging since the late 90s and actually pass it this time?

As I posted over at your place, everytime I see that photo I can't help but think that he's just fatteneing up them tabbies for Thanksgiving.

The Liberal "Pink Book" calls for annual spending of $15 billion dollars on childcare, not to mention various inititiatives which amount to handing female voters bags of cash as quickly as humanly possible, see:

"“It’s nice to know we have a leader who is on the same wavelength as we are and we’re going to push him a lot to make sure that he stays there,” said Liberal MP Diane Marleau, one of several members of the Liberal Women’s Caucus who were in attendance."

On behalf of the hardworking men who pay for the bribes that your hideously immoral gender demands from politicians I offer a hearty "fuck you"; we'll remember this when The Backlash comes.

On behalf of the hardworking men who pay for the bribes that your hideously immoral gender demands from politicians I offer a hearty "fuck you"; we'll remember this when The Backlash comes


hmmmm, methinks somebody ain't been getting any and won't be for some considerable time to come

"On behalf of the hardworking men who pay for the bribes..."

Anon, that's supposed to be "hardworking men who pay their taxes who pay for the bribes". Boy, did you drop the ball. And when The Backlash comes, could you let us know where they're playing? Thx.

Alison, I think you forgot fivemovesthatwillhavehimbegging.gc.ca.

On behalf of the hardworking men who pay for the bribes that your hideously immoral gender demands from politicians...

Wow! You must have really got taken to the cleaners. Did she get custody of the kids too?

I'd forgotten all about The Backlash....
Will they ever free the Earth from alien domination? What really happened to the Blackcollars hidden under the mountain? Will the aliens find a way to counter the Backlash drug? Will Caine ever become a Blackcollar?