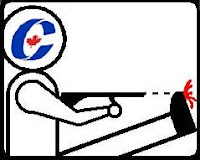 and "every tool" in Guy Giorno's toolbox, aka "All Conservative Members of Parliament" :
If it was ok for Harper, Layton, and Duceppe to write to the GG in Sept 2004 and "respectfully point out that the opposition parties, who together constitute a majority in the House, have been in close consultation. We believe that, should a request for dissolution arise this should give you cause, as constitutional practice has determined, to consult the opposition leaders", then why are you now all huffy about "backroom deals", referring to the possibility of "a coalition you didn't vote for" as a coup?
Did Layton only become a "socialist" and Duceppe a "seperatist", as most of you seem to prefer to spell it, some time after 2004?
Also, in your comments at NaPo and CBC, where Layton has now become a full-fledged "communist", your outrage that the Bloc is "only out to destroy Canada by separating" would seem considerably more credible if you didn't respond to this perceived threat to Canadian unity with a threat of your own to resuscitate the western separation movement. Just sayin' ...
Update : Stageleft on Liberals and Socialists and Separatists ... Oh My!
Posted by Alison at 1:45 am
Email ThisBlogThis!Share to TwitterShare to FacebookShare to Pinterest
Labels: coalition, Con fuckwittery, Duceppe, Harper, Jack Layton