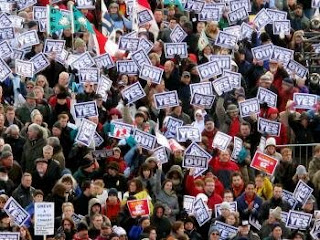 It's time you guys put together an official coalition website and Impolitical has your front page image right here.
What we need from you now is an official source for quotes, breaking news and coalition events to counteract the Corporate Television Vehicle™ which will reliably continue to pump out every rumour and screw-up in the coalition because that's what they do.
Yes, you have your own party websites but Canadians need to be convinced this is more than party politics as usual. Yes, there's lots of grassroots groups doing this already but we need to see you to stand behind it.
Build it and the press will come. There's economists and constitutional experts writing interesting articles about the coalition every day. Publish them. We need pledge drives for when Steve goes for another election do-over. We need dates for the coalition townhalls you better be planning to have in your districts. We need, as Albertan proposed in comments, a one-stop source for :

"more letters to the editor, stacking of on-line polls, calls to talk radio, leaflets in the mail, phone calls to voters and other actions to pursuade the public that the future of Canada is at stake".

And we need it to be interactive - moderate those comments if you must - but let Canadians know you are listening by responding to at least some of them every day.
We need all this and we need it all in one place.
Obama-size now.
Here - I'll get you started with three killer quotes :
Coalition News From Away :
NYTimes : Decline of 70,600 Jobs in Canada
"Canada lost 70,600 jobs in November, about three times more than many economists had expected, Statistics Canada reported on Friday. It was the biggest decline in 26 years.
The news came just over a week after Canada’s Conservative government introduced an economic plan that offered little stimulus but featured cutbacks in government spending.
That approach puzzled many economists and contributed to political turmoil that led the government to shut down Parliament on Thursday to prevent its defeat."

NYTimes : Canadian Leader Shuts Parliament
Canada's parliamentary opposition reacted with outrage on Thursday after Prime Minister Stephen Harper shut down the legislature until Jan. 26, seeking to forestall a no-confidence vote that he was sure to lose.
"This really has been a blow to parliamentary democracy in Canada,” said Nelson Wiseman, a professor of political science at the University of Toronto. "It has lowered the status of the elected Parliament and raised the status of the unelected prime minister."

LA Times : Canada Prime Minister Stephen Harper heads off defeat
"But the narrow escape from a crisis that was largely self- inflicted has badly scarred a prime minister already widely regarded as a bully, and reawakened a national unity crisis in a country where regional grievances are sometimes dormant but easily stirred.
"By padlocking the doors of Parliament when so many people in Canada are facing challenges, losing their homes, their jobs or their pensions, he's decided that his job is far more important than theirs," said [MP Brian] Masse."
Posted by Alison at 8:47 am
Email ThisBlogThis!Share to TwitterShare to FacebookShare to Pinterest
Labels: coalition, media bias, Stephen Harper

So sad that we need to read the NY Times and LA TImes for an honest bead on Canadian politics.

I just turned off the CBC 5 PM news to go barf as they led strongly with the Vancouver Pro-Con rally and then switched to the Toronto Pro_Coal rally where Stephan Dion spoke. They immediately cut to commentary about a split in the Libs over their leadership...

And to think of all the hours I put into 'saving' the CBC.

Alison's absolutely correct: the corporate Rights have control of the mainstream media and are doing a bang-up job of grass-roots organizing of their constituents. They stay on message and it could very well work to give us a fascist-style government (and don't accuse me of hyperbole, please: look it up, darlings) if we don't smarten the flip up and get our collective shit together.

It is interesting that the parliamentary prorogue has turned into a competition focused on grassroots organizing! This is a good thing. And I agree 100% that the Coalition needs to get its communications head screwed on straight and start opening up a real dialogue using the principles of transparency and the technologies of participation.

I registered ChangeGov.ca and I've been thinking about how a broad-based movement can really influence the political moment in a lasting way through a declaration of principles that are bigger than the details of a stimulus package, that go to the depth of our democracy: openness, transparency, accountability, access, participation, collaboration. And yes, this is influenced by what we saw in the Obama movement.

According to bigcitylib, Rae is speaking out in support of the coalition. Maybe your post should be sent to Rae, as well as to the NDP.

I saw somewhere that Manley wants to drop it. Boo!

This is my contribution.

Excellent point Alison. Here is what I posted minutes ago at JJ's place:

The coalition has to come up with rebuttal talking points for every exaggerated if not completely dishonest talking point put out by Harper.

Here is a partial list of concepts to work from:

1. Harper very much supported and worked with the Howard coalition in Australia. Did he consider that government illegal?

2. Harper has not problem with the Bloc when it votes in favour of his legislation in the House. In fact, a deal was penned with the Bloc and NDP to bring down a Liberal minority government in the recent past.

3. The Bloc MPs have been acting as responsible parliamentarians for nearly two decades and have supported legislation and brought forward motions that benefit all Canadians (e.g. employment insurance, support for cultural industries, etc).

4. Not once has the CPC announced that it would remove the offensive attack on pay equity that was included in Flaherty’s economic update. This is clearly an attack on women.

5. The opposition parties are willing to support the CPC on sound policies, especially an effective economic stimulus package that serves the needs of all Canadians. Obviously, this is not a priority for PM Harper since he feels it’s better to shut down Parliament than to work with all parties to help Canadians facing economic hardships.

7. Finally, the opposition parties recognize that the CPC have enough seats to form a minority party and are willing to support that government if Harper is replaced as leader. Our loss of confidence is not with the CPC MPs elected by Canadians but with their leader who refuses to cooperate and has shown an inability to work for all Canadians.

At this point, I am very willing to endorse Rae for interim/elected Leader. He did extremely well here in Winnipeg this weekend.

Holly Stick: Rae is speaking up for the coalition vigorously and eloquently. Here is what he sounded like in Winnipeg on Saturday.