To the coalition : Keep Meeting 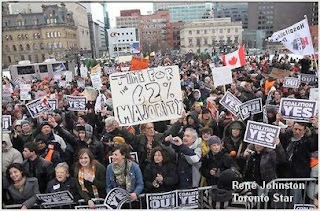 Thousands of pro-coalition supporters protest on Parliament Hill after the Governor General agreed to suspend government until late January.

From Eric Finlay at POGGE :

To the coalition : Keep meeting.

Parliament has been prorogued. So you're not meeting in an official capacity. But nonetheless meet as if you were not prorogued.
Find a site. Pay for it yourselves, and be explicit about that. You're citizens meeting to speak. But in so doing, keep up the business of Parliament. Debate. Draft bills. Hold (unofficial) committee meetings. Vote... on memoranda of understanding.

Show the country, its citizens, and its investors that while you do not argue with the legality of the delay, you see no need to go on vacation in this crucial economic time. Assume (without even explicitly saying it) that in January when Parliament reconvenes, Harper will fall, the coalition will form government, and the memoranda of understanding and drafted bills will be dealt with, bang-bang-bang, because you have already hashed this out.

Invite the Conservatives to join you. If you get some momentum, you might get no few disgruntled members willing to bet that Harper's fury will not control their lives.

Let the Conservatives take an extended vactation. Shrink the proposed vacation period instead, to mark the severity of the economic need.

Make it plain that you do not dispute Her Excellency's right to consent to her nominal first minister's request to prorogue, and that you respect her for making a difficult decision in uncharted waters. Open each session with a consistent, well-crafted adaptation of protocol which is sufficiently distinct that it does not trespass upon Parliament's formal privileges... but that nonetheless shows clearly that you do this out of the uttermost respect for the Queen, the Governor General, and the Canadian people.

Repeat frequently that you're just trying to get work done now, so that things can happen fast when the doors unlock in January. It can't be trespass upon the privileges of government if its level of formality is that of a caucus meeting.

Be completely transparent. Defeat the smoke-filled rooms meme. Heck, hold it in a bar, if you can find one big enough.

The media will come to you. I can think of no more efficient way to stretch your advertising dollars than a bold, newsworthy stroke like this.

If you do this, I will donate to the limit of my ability. I will write letters to the editor praising your actions. I will take my four children and go door to door. In Edmonton. In December.

Pass it on.
KEEP MEETING.

Pass it on to your MP and the federal party leaders, or write one of your own but keep on these guys. The Corporate Television Vehicles™ are saying it's over. It isn't. We're just getting started.
Posted by Alison at 8:07 am
Email ThisBlogThis!Share to TwitterShare to FacebookShare to Pinterest
Labels: coalition, proroguing democracy

I'm passing it on in letters to MPs as well - and throwing in a plug for proportional representation.

What I want to know is how do I find out about rallies in my area? I seem to be very unconnected and I haven't received any calls from local Lib or NDP offices (except to ask for my money, that is).

Deanna - I forget where in the country you live so here's a list and phone number for rallies :
Make Parliament Work

Will be back with more in a mo and thanks for the reminder - will do a post.
Letters is the most important thing we can do right now - good for you.

I've seen this making the rounds of the net, and I can't quite see why everyone thinks it's so brilliant.

Only on the left would we see more meetings as the way to win a street fight.

Meet away if you want, but I want to see Layton, Mucair, Broadbent, Rae, Iggy and others criss-cross the country speaking out against Harper, building support for the coalition, and rallying public opinion.

I want to see five emails a day landing in my inbox asking for money to put ads on TV and radio countering the Tory PR campaign.

I want to see more letters to the editor, stacking of on-line polls, calls to talk radio, leaflets in the mail, phone calls to voters and other actions to pursuade the public that the future of Canada is at stake.

We're in a war for the hearts and minds of Canadians. Sure we have to have a plan, and a good plan, to govern. But the best plans won't mean anything if we let the Tories win the PR war.

Albertan : I've seen this comment of yours at a few sites too ;-) so I hope you're also sending it party leaders and MPs to spur them on.
You must know that most of what you're asking for above is already happening - it isn't an either/or proposition.

Were you perchance at the Vancouver rally last evening? Cast of 1,000's including Yours Truly, "drf" and the illustrious Frank Frink. We looked for you, but, Alas, to no avail.

Great turnout, lots of enthusiasm and determination to make harperco work for it if he's going to hijack Canadian government. Peter Julian was particularly good, as I expected . . . .

No, I had to work and felt soooo guilty. Must have been just what everyone needed after the prorogue.
Peter Julian is da bomb.