Reality vs Steve ... and Chuck and Jim too apparently 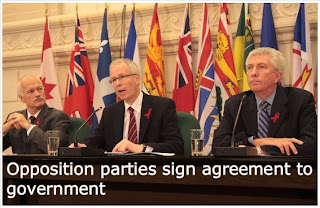 "Mr. Speaker, yesterday, as part of the culmination of the machinations of the leader of the NDP, we had these three parties together forming this agreement, signing a document, and they would not even have the Canadian flag behind them. They had to be photographed without it.

They had to be photographed without it because a member of their coalition does not even believe in the country. As Prime Minister it is not my responsibility to turn the keys of power over to a group like that."

Update : Kady reports Chuck Strahl and Jim Prentice both backed him up on this afterwards at a post-QP scrum, despite the fact there were pictures of Dion, Duceppe, and Harper signing the agreement in front of at least three different Canadian flags on the front pages of papers right across the country.

At least Jim seemed to knowing he was working it - tried to get away with it and then admitted, "The point is there were not only Canadian flags behind the opposition parties."

No, Jim, there were also provincial flags, as usual, which is not at all the same thing as "they would not even have a Canadian flag behind them".

You guys are really losing it.
Posted by Alison at 2:10 pm
Email ThisBlogThis!Share to TwitterShare to FacebookShare to Pinterest
Labels: coalition, Stephen Harper is a git

Well, I suppose this is what happens when the Conservatives lose the initiative and Stephen suddenly finds himself on the defensive and really fearing for his job.

It's actually kind of frightening to consider that everything else Steve and his bots have been telling us all along might also be this completely divorced from reality.

Its actually kind of frightening that anyone thinks its important whether they had a flag there or not. This is not about the goddamned flag, its about getting a government that is interested in fixing problems instead of a government whose first priority is sticking it to the opposition.