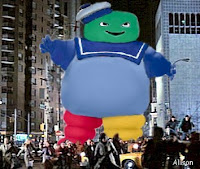 The $1-billion, 1,100-unit Olympic Athletes Village being built by Millenium Development and financed by Fortress Investment Group, a New York-based hedge fund and private-equity company, featured rather controversially in Vancouver civic politics news of late when we learned that city council had secretly voted to loan the project $100-million.
In October, city of Vancouver's real-estate director Michael Flanigan assured us that in the case of a default by Millennium, Fortress has said it has the resources to complete the project :
"They have their profit out front, their equity in the deal, their entire corporate guarantees on the line, personal guarantees on the line," he said. "All this will be exhausted before the taxpayer will ever be exposed for a dime. We don't see there is a risk with taxpayers."
"It's believed Fortress Credit has advanced only about half the value of the loan to this point."

NY Times, Dec. 3 : Fortress, the Hedge Fund, Is Crumbling
"Cracks are spreading throughout the Fortress Investment group, once a leading player in the worlds of hedge funds and leveraged buyouts. On Wednesday, Fortress’s shares fell 25 percent to $1.87. The once-celebrated company has lost 89 percent of its market value over the last year."
Arthur Griffiths, the prominent Vancouver businessman who helped bring the Olympics to Vancouver, remains cheery : "There isn't a city in North America that wouldn't kill to be in the position Vancouver is, having the Olympics here in 2010, during the current economic crisis."
Developing, as they say...
Posted by Alison at 5:38 am
Email ThisBlogThis!Share to TwitterShare to FacebookShare to Pinterest
Labels: 2010 Games, Five Ring Circus, Fortress, Millenium, Olympics

Aren't we lucky that cheery Arthur Griffiths didn't make it to Victoria to represent us here in the West End? It appears he really has his finger on the pulse, huh?