Cannon and Van Loan tell Abdelrazik to piss off 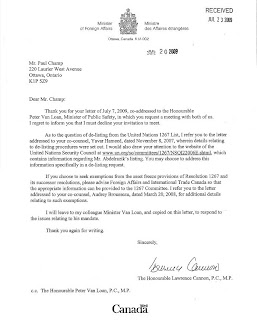 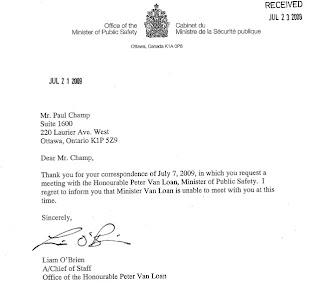 .
Abdelrazik wants the federal government to help him get his name removed from a United Nations terror watch list so he can lead a normal life again.
You know - get a job, go to a doctor, get on a plane, have a bank account, accept anything from anyone without risk of their being charged with being in violation of the UN's 1267 shunning regulations.
.
Above are the responses to Abdelrazik's lawyers from Minister of Public Security Peter Van Loan and Minister of Foreign Affairs Lawrence Cannon telling them to piss off.
Click em to read em, courtesy of The Peoples Commission via the indefatigable Toe at BnR.
.
Cannon adds further insult to injury by advising Abdelrazik to go ahead and try to get off the list himself although to date no one has ever been removed from that list without a supporting submission from their government.
Indeed the Chairman of the UN Security Council’s Al-Qaida and Taliban Sanctions Committee noted two weeks ago that although Abdelrazik went on the list in 2006 - some 3 years after Canada had him arrested in Sudan - the committee has not gotten around to an indepth assessment of his case yet.
The list of 513 people currently includes 38 people presumed dead.
.
Posted by Alison at 3:40 pm
Email ThisBlogThis!Share to TwitterShare to FacebookShare to Pinterest
Labels: Abdelrazik, Lawrence Cannon, UN black list, Van Loan

Alison,
Sven here. I have some crazy pictures of the Taser died for you hummer! Honestly! would you like?

What a revolting piece of crud.