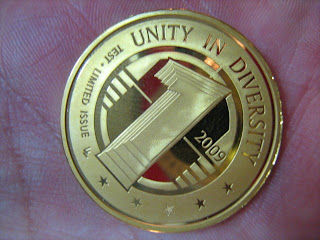 Well here it is - the proposed "united future world currency" unveiled by Russian President Medvedev today and handed out to the other G-8 leaders.
The test coin "means they’re getting ready," Medvedev said. "I think it’s a good sign that we understand how interdependent we are."
.
China and Russia have been calling for a supranational currency, a mix of regional reserve currencies controlled by the IMF and delinked from sovereign nations, as part of the drive to address the global financial crisis and replace the dollar as the world's reserve currency.
.
When asked about it in March, US Treasury Secretary Tim Geithner told the Council on Foreign Relations : "We are quite open to that" - causing a drop in the dollar requiring him to follow up with : "I think the dollar remains the world’s dominant reserve currency" - after which "the dollar subsequently recovered much of its losses".
.
I guess my dream of a global currency based on reducing carbon emissions didn't make the cut again this year. On the upside, Lou Dobbs and Glenn Beck should be going apeshit tomorrow.
.
Posted by Alison at 9:03 pm
Email ThisBlogThis!Share to TwitterShare to FacebookShare to Pinterest
Labels: Council on Foreign Relations, IMF, money money money

Holy shit! Do the lizard people know about this?