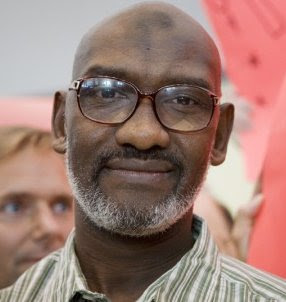 Abousfian Abdelrazik spoke out this morning about his exile, his torture, the false charges against him, the harrassment of his dying Canadian wife and her family by CSIS before he returned to Sudan to care for his ailing mother in 2003.
.
He could identify by sight, he told us, the Canadian agents who questioned him while he was in captivity in Sudan, including the one who told him "Sudan will be your Guantanamo" and that he was never coming home.
He describes being interrogated in Sudan by Foreign Affairs parliamentary secretary Deepak Obhrai, who questioned him about Osama bin Laden and what he thought of Israel.
.
I watched it on tv.
Paul Koring, Dr. Dawg, and Kady were there.
.
There's a sense in which this case is more important than that of Maher Arar in terms of how Canadians, at least Muslim Canadians, can expect to be treated by our government and whether CSIS is under anyone's control any more.
There was no US middleman here, no wiggle room in which Canadian intelligence agencies could be said to have been overpowered or shut out of the process by US security forces.
This one is ours.
.
In the meantime, Abdelrazik is still on that 1267 UN blacklist : he cannot work, he cannot receive money or medical attention, he cannot fly, he cannot receive gifts.
He is currently an exile in Canada.
.
UPDATE : "NDP foreign-affairs critic Paul Dewar called on the government to launch a public inquiry even more far reaching than the judicial probe into the imprisonment and torture in Syria of Maher Arar. ... there was no middle man," Dewar said.
.
Deepak Obhrai is currently away in Asia.
.
Posted by Alison at 12:05 pm
Email ThisBlogThis!Share to TwitterShare to FacebookShare to Pinterest
Labels: Abdelrazik, CSIS, Deepak Obhrai, Maher Arar, UN black list

Your lede is perfect.

As you say at my place--this one's all ours. Let's hope things unfold as they should.

thanks, Alison. As usual, right on target. I was incensed when I watched Mr. Abdelrazik's press conference. Who are the two MP's he mentions?! You note Ohrai. Wasn't there another one mentioned? I didn't quite catch it. I'd like to see a letter-writing campaign (again) to Cannon, Harper & party leaders to force open investigation of this case. I agree with you about the importance of this. Without public exposure & justice in this matter, there, we all could go.

Very kind, Dr.Dawg - you know the rest of us just trundle along in your footprints on this one.

CanNurse : I believe Abdelrazik mistook the other visitor for an MP.
The Star, April 2008 :
"Abdelrazik got no help last month when he met in Sudan with an official from Foreign Minister Maxime Bernier's office and with Conservative MP Deepak Obhrai, Bernier's parliamentary secretary.

"Essentially what it amounted to was an interrogation," said Hameed"

Excellent idea on the letter-writing.
Dewar (NDP) is asking for an inquiry it so now it would be good to get the Libs and Bloc onside.
At the parliamentary committee "Review on the Findings and Recommendations of the Iacobucci and O'Connor Reports" earlier this year, Libs Andrew Kania, Mark Holland, and Robert Oliphant, and Bloc Serge Ménard and Maria Mourani were visibly scandalized by CSIS answers to questions on Abdelrazik and Khadr. I'm hoping they'll step forward again now. Write to them too.

Thanks for the clarification re the MP confusion & also the other MP names. (Of course! Makes sense now. Bernier's people!)

I'm not usually litigious, but hope he sues the pants off the govt.

Can anyone tell me why he can't receive medical attention?

Anyone have info on how to send money? I had it and lost it.

Anon : I'm not aware that anyone is still requesting money for A.
Here's the original Facebook link, which in turn links to The Peoples Commission, the most up-to-date source on A and all the others

Paul : Unless I'm reading it wrongly it's on the UN 1267 page Exemptions to the Assets Freeze Dec. 2008. Note exemptions must be pursued by Member States, which Canada is not doing :
"under paragraph 1(a) or under paragraph 1(b):
- under paragraph 1(a):
• basic expenses, including payment for foodstuffs, rent or mortgage,
medicines and medical treatment, taxes, insurance premiums, and public
utility charges;
• payment of reasonable professional fees and reimbursement of incurred
expenses associated with the provisions of legal services;"

Just got an email from Retour au bercail/Project Fly Home

Please donate to the campaign. Although we are all volunteers, our work to support Abdelrazik's campaign involves many costs, and we depend entirely on donations to cover those costs. A very big thank you to those of you who
have already supported us; your generosity has made it possible for us to continue this important work. Please make your checks out to "Solidarité sans frontières", with "Project Fly Home" in the subject line and send it to
1984 Le Ber Montreal QC H3K 2A7. (Note that this money will go to the campaign, not to Abdelrazik, so is not covered by the 1267 embargo.)