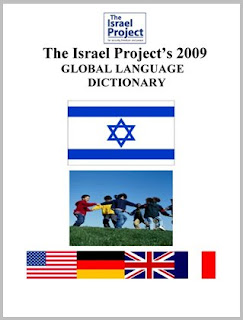 Republican shuckster Frank Luntz has taken time out from his busy schedule attacking Obama and his semi-somewhat-un-universal healthcare proposal in the US to put together a 116 page Global Language Dictionary of talking points to reshape public perception of Israel's carnage in Gaza side of the story on internet chat forums, blogs, Twitter and Facebook :
Be positive.
Turn the issue away from settlements and toward peace.
Invoke ethnic cleansing.
Don't mention religion or use biblical quotations.
.
What a spectacularly awful idea.
Presumably intended for use in conjunction with Project Megaphone. and his "Israel Communication Priorities 2003", also for The Israel Project.
.
Frank, you will recall, previously advised Steve on how to sell the ReformaTory brand to Canada and how to deny the existence of global warming sufficient to the task of forestalling government action on climate change on both sides of the border for years.
.
Let's look at just one of Frank's talking points.
While "Invoke ethnic cleansing" would seem a very unlikely propaganda prospect given the circumstances, here Frank is reframing the issue regarding the prospect of Israelis having to give up (further?)settlements in the West Bank. The "best settlement argument", says Frank, is to make a parallel between the Arab communities in Israel and the Jewish settlers in the West Bank:

"The idea that anywhere that you have Palestinians there can’t be any Jews, that some areas have to be Jew-free, is a racist idea."

Wow.
OK, time to bring on the "Internet fighting team" !
This is the name given by the Israeli Foreign Ministry to a paid "team of students and demobilized soldiers who will work around the clock writing pro-Israeli responses on Internet websites all over the world, and on services like Facebook, Twitter and Youtube."

"They will punch a card," says Elan Shturman of the Foreign Ministry.

"Our people will not say: ‘Hello, I am from the policy-explanation department of the Israeli Foreign Ministry and I want to tell you the following.’ Nor will they necessarily identify themselves as Israelis. They will speak as net-surfers and as citizens, and will write responses that will look personal but will be based on a prepared list of messages that the Foreign Ministry developed."

Good to know. Thanks for the heads up. A little hard on the now-discredited people out there genuinely trying for honest debate, don't you think?
.
So the next time Steve refers to his fellow Canadian parliamentarians as anti-Semitic for criticizing Israel, or Stockwell Day applauds what it pleases the Israeli government to call our Canada-Israel Homeland Security pact, or a sitting British MP is refused entry to Canada for delivering aid to Gaza, or a Star editor unfairly castigates one of her own columnists in public at the behest of the CJC, or a Canadian Parliamentary Coalition to Combat Antisemitism blubbers on about "blood libel" and some new expanded definition of anti-Semitism, just ask them to point you instead to the relevant talking point in Frank's dictionary. It'll save a lot of your time.
.
Yes, I'm ragging on about Israel a lot.
There seems to have been a sudden bump in officially sanctioned nonsense about Israel since we finalized that public security deal last year to protect the Canada-Israel border. *snerk*
.
For a very good article on the alarming ties between Steve's government and Jewish lobbies and the Christian right in Canada, see retired B'nai Brith Chair and Concordia University History Professor Emeritus Stephen Scheinberg :
Partners for Imperium: B’nai Brith Canada and the Christian Right.
.
Posted by Alison at 3:30 pm
Email ThisBlogThis!Share to TwitterShare to FacebookShare to Pinterest
Labels: anti-Semitism, Canadian Parliamentary Coalition to Combat Antisemitism, Christian right, CJC, Frank Luntz, Israel, social media, Spin, Stephen Harper

"shuckster" -that's a good one, also probably not actionable ;-)