Gay freakout at The Star 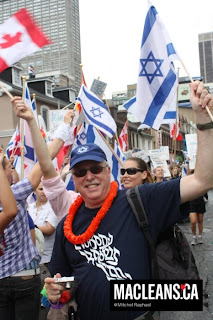 "Nobody Knows I'm Gay" reads the stylized font seen here on Canadian Jewish Congress CEO Bernie Farber's t-shirt as he marches in this year's Gay Pride Parade in Toronto.
It's ironic. I'm betting you got that right away.
It's also ironic to see Farber in the parade at all after all his blather about the parade "not being a political event" and his attempts to lobby against the participation of the actual gay group Queers Against Israeli Apartheid in the parade but whatever.
Freedom of expression for everyone, right?
Well not quite.
In a blogpost about Canada Day, a blogpost making no mention of either Farber or the Pride Parade, Star columist Antonia Zerbisias notes a little dent in freedom of expression :

"Excuse me but since when did the interests of Zionist lobby groups determine who or what Canadians can see and hear?

In recent months, to list just three examples, there have been concerted campaigns against the staging of Caryl Churchill's controversial Seven Jewish Children: A Play for Gaza and an academic conference at York University where the so-called "one-state solution'' was to be discussed.

We also saw British MP George Galloway be denied entry to the country for a speaking tour, just because he brought aid to bombed-out Gaza.
Now comes word that the only way the respected Al-Jazeera English news service, currently applying for TV distribution in Canada, can win the support of these same Jewish groups is to have them become consultants.

Journalistically speaking, that is hardly kosher."

Some 20 comments down the page five days later someone brings up Farber marching in the Pride Parade with a political group and Zerbisias retorts ironically :

"Yes imagine my surprise when I saw Bernie Farber identifying himself as queer by joining a pro-Israel gay rights group in the parade ... Funny because I didn't know he was gay.
Not that there's anything wrong with that."

Subsequent comments unnecessarily confirm that Farber is indeed not gay but nonetheless Farber has a letter published in The Star to say he is not gay that Zerb has "a rather stilted agenda" ... not that there's anything wrong with that.
Now today Star editor Kathy English posts this long, fawning, completely over-the-top apology to Farber chastising Zerb under the misleading header :
'Gay' blog post was just not fair :

"It's distasteful to me to repeat what she wrote, but context – and making public amends to Farber – demands it ... an embarrassment for the Star ... tasteless and fell short of the Star's standards ... don't have the right to stereotype or scapegoat ... invective and notions of absolute free speech ... sarcastic nonsense ...Farber is not gay...
The issue was subsequently discussed by the CJC's executive committee, concerned that inaccurate information about Farber was "published under the Star banner."

and a whole lotta blah, please don't hurt me, it's not the Star's fault blah, blah
But distasteful ?
Good lord, Star editor and your pompous publisher Cruikshank too, who previously trashed Heather Mallick at CBC for her piece on Sarah Palin, how stupid do you want to look?
Get a fucking grip.
You think this is about teh gay, or in this case, teh obvious-to-everyone-else not gay?
It's about what she wrote in her original post.
You got pwned and blindsided by the CJC and you panicked and threw your columist under a gay bus to prove it. Shame on you.
.
Now what was Zerb saying again about freedom of expression and the Zionist lobby?
.
Edited for spledling mitakes doh
.
Posted by Alison at 4:08 pm
Email ThisBlogThis!Share to TwitterShare to FacebookShare to Pinterest
Labels: Blogging Tories, Canadian Jewish Congress, Pride Toronto Parade, Zerbisias, Zionism

This: (Amongst other lines) "f'in cracked me up.

"how stupid do you want to look?
Get a fucking grip.
You think this is about teh gay, or in this case, teh obvious-to-everyone-else not gay?"


Luckily, I was not enjoying a mouthful of my fine "home-brewed" red wine at the time, as it no doubt would have been spewed across the room. (This is not a long distance in our tiny strata, BTW.)

Thank you once again for an enjoyable, thoughtful, well-researched post . . . .

ps: The "not that there's anything wrong with that" reference brought me WAY back to the "Seinfeld" days.

They leave you with a deeper understanding of sanctimony, don't they, these people -- Farber, Cruickshank, and his steno, English -- who whine about rough manners in the blogosphere, all the while actually behaving as schemers or cowards.

Terrific post, Alison. (Note to Kathy English: What Alison wrote is called a blog-post. What I've written is called a comment. Have a nice day at your well-edited newspaper.)

Didya know you can find @kathyenglish on Twitter? Given Antonia also has an (active) account and so have a lot of lefties...

Nobody would have given a flying fuck about some comments left on a five day old blogpost if Kathy English hadn't decided to blow Farber on the pages of The Star.
Now her cowardly pedantry is featured on The Corner. LOLZ.

I doubt that Kathy English "decided" that on her own. The poor schlub was pretty much taking dictation is my guess.