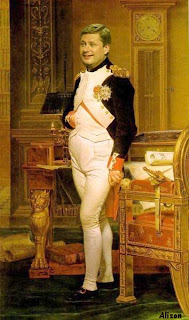 "Harper managed to get the military to give him a salute that's normally reserved for the Governor-General. As Heritage Minister James Moore explains in the video, this was something that the Prime Minister apparently wanted."

Really? How very presidential of him.

The Governor General is the Commander-in-Chief of the Canadian Forces – not the Prime Minister - but I guess since she allowed him to suspend parliament and declare himself head-of-state back in December, she may as well let him play with her honour guard as well.
.
Update : Good point. Impolitical notes the hideous irony of James Moore, Minister of Heritage, being sent out to defend this latest example of "creeping political vandalism".
.
Posted by Alison at 5:20 am
Email ThisBlogThis!Share to TwitterShare to FacebookShare to Pinterest
Labels: Governor General, Napoleon, proroguing democracy, Stephen Harper is a git

But will he try to take the Pope-mobile out for a spin?

I have to say, that is a deliciously appropriate graphic.

Wellingtons would be good but I think AIR-TACs would be more along the lines of what you're going for.