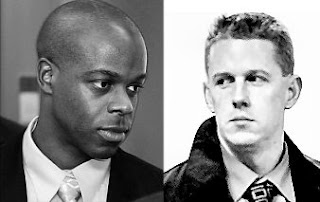 Constables Kwesi Millington and Bill Bentley, two of the RCMP officers involved in the TASER™ death of Robert Dziekanski at YVR, are mounting yet another ludicrous and embarrassing court challenge to prevent the Braidwood Inquiry from finding against them, and officers Rundel and Robinson are expected to follow suit.
.
After Justice Braidwood warned that his final report might - might - accuse them of tasering Robert Dziekanski five times when it was "not justified," of acting "inappropriately aggressively", and of giving "self-serving and misleading" testimony and "misrepresenting the facts" at the Braidwood Inquiry, RCMP lawyers took a constitutional challenge to the BC Supreme Court in June, arguing that as a provincial inquiry, the Braidwood Inquiry did not have the authority to rule against members of the federal RCMP.
.
They lost that one. when the judge dismissed their application. To their credit, RCMP brass in BC appear to be cool to these court challenges.
.
But now lawyers for Millington and Bentley are turning to the BC Court of Appeals to quash that BC Supreme Court ruling, mounting the same arguments about jurisdiction as before and seeking :

"a permanent injunction to prevent the commission from continuing any proceedings against Millington and Bentley or making any findings of misconduct until 60 days after the appeal court rules on the matter. No date has been set for the appeal court hearing."

60 days from an appeal court hearing that doesn't even have a date set yet would likely put it past the resumption of the Braidwood Inquiry in September. At that time Braidwood will be looking into an RCMP email - which surfaced on what was expected to be the Inquiry's final day - that alluded to the four officers' having a plan to TASER™ Dziekanski prior to arriving on the scene, contradicting their sworn testimony that they did not have such a plan.
.
Running out the clock on inquiries of misconduct - it's an old RCMP tactic in BC and elsewhere in Canada.
.
Posted by Alison at 2:24 pm
Email ThisBlogThis!Share to TwitterShare to FacebookShare to Pinterest
Labels: BC Supreme Court, Bentley, Braidwood Inquiry, Millington, RCMP