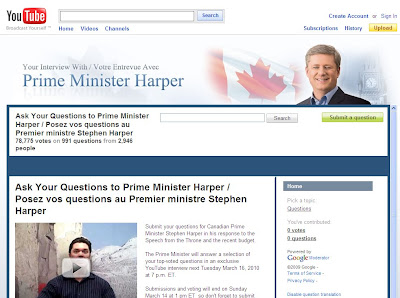 Submit your questions for Canadian Prime Minister Stephen Harper in his response to the Speech from the Throne and the recent budget. The Prime Minister will answer a selection of your top-voted questions in an exclusive YouTube interview next Tuesday March 16, 2010 at 7 p.m. ET.

It must have seemed like a pretty good idea at the time when they were kicking it around the PMO - avoiding reporters while controlling the message, getting down with the new social media, and reaching out directly to the demographic with a solid majority on Youtubeworld locked down - youth.
But as any working clown will tell you, teh youth are a very tough crowd. A sampling of questions submitted to Steve so far :

Check out the proper way to crush a beer can with ur head!!! It rulez﻿

why is the quality﻿ of this video so shitty?

Mr﻿ Harper this a question regarding what has happened to the Afghan detainees. Currently by having retired Supreme Court Justice Iacobucci look into the documents, you have only created a smokescreen to hide behind. You have not chosen a sitting judge who would actually have power to do a proper inquiry. As well you are currently in violation of the Constitution by withholding these documents from parliament. When will you be releasing the documents regarding the Afghan detainees to parliament?

i﻿ gotta question,?? which u will never reply to, ... why the fuck do you lie stephen Harper??

WHEN ARE﻿ YOU GOING TO LEGALIZE WEED ?

He hasn't listened to Canada for a long time, I'm Surprised he wants to start now. :/﻿

What did you do during the time Parliament was﻿ prorogued besides sitting next to Wayne Gretzky and coming up with a plan to change the national anthem?

What's with the low-quality﻿ vid and the script reading...

I agree that the﻿ stimulus package was a good oppurtunity to further our advancements in green energy, but due to your lack of intrest in said topic, my scrotum gets itchy when I engage in sexual intercourse with multiple women. is this because of your lack of intrest in energy efficiency? If so what steps will you take to ensure the cleanliness of my yambag? Will you tax it? WE NEED answers Mr. Harper!

When will your government end the﻿ waste of corporate tax cuts? As well, when will post secondary education become a priority for your party?
Furthermore, why are your MP's so disrespectful to Canadians?

WHAT'S YOUR HAIR MADE OF?﻿

Why have you not requested that the United States release Omar Khadr from the Guantanamo Bay concentration camp? He was just a child when﻿ he was arrested in Afganistan. His continuing detention puts Canada's image as a champion of human rights in jeopardy. (thumbs up if you want Mr. Harper to reply to this question.)

My question is how can you live with yourself?As far as being a leader that has﻿ plunged Canada into record debt with reckless spending and poor decision making, I cannot see a positive side to this Prime Minister. Absolutely shameful governing period.

stephen harper - can you please﻿ quit your job

I﻿ couldn't be bothered putting down questions for that dud Harper

Jeez At least make﻿ it watchable. I mean it's not 2005 anymore. You are the government and you can't afford a freaking HD camera... sad

I think the prime minister should invest in﻿ a steady cam and a better mic for his youtube rep... c'mon...

How can you﻿ possibly justify not legalizing marijuana?

Why are we "fighting" for peace (contradiction)? As a Canadian i hear that we are the peacemakers who care about all beings but yet we barely support those who are less fortunate. If Canada is known as the peacemakers of the world and have great alliances (U.S.A) than why do we waste our much needed money on weapons of war instead﻿ of food and shelter for the world?

why wont you legalize﻿ weed ?

How much did this little google propaganda exercise cost Canadians?Are﻿ cameras for various networks next to be invited in to parliament for your grand eminence to pretend you are addressing the populace when you are merely manipulating us?

testicals. that is﻿ all.

I think I have a way to cut the deficit ...﻿ stop making Canadians pay for your makeup PM. You want to look the way you do - do it on your own darn dime.

What agreement we have with﻿ Israel? Will you send troops for Israel to attack Iran?

With crime at an all time low, why get tough on it, as well as building more prisons, shouldn't we build﻿ more schools and hospitals?Is there nothing to be learned from californias budgeting nightmare experience?

Harper, why have﻿ you continued to ignore your own Accountability Act?

why are you such an﻿ asshole on climate change?

Why won't﻿ you call an impartial public inquiry into the Afghan detainee affair?

When will Canada take a leadership role in the world when it comes to the environment? I am sick and tired of the Prime Minister taking a supporting role on such an important issue affecting our lives.﻿ Stop using the economy to ignore such a pressing issue. Time is no longer on our side when it comes to this issue. Please act now!

I often hear of you dirty playbook tricks , can you share them with the rest of us to use !Help﻿ us all learn to be Cons !

Why bother? Harper prorogued parliament﻿ so he wouldn't have to listen to anyone else. What makes you think he's going to listen now?

Methinks Mr Soudas better get himself a coupla sockpuppets up there pretty damn quick or Steve will be spending next Tuesday night talking about legalizing weed, why Soudas' vid is so crap, and um, testicals.

h/t Kady, who has a couple of questions of her own about the appropriateness of Google gifting free Youtube facetime to Steve while registered as a federal lobby group.
.
And here we go : Harper's Big Live Late Pretaped Youtube Debut
.
Posted by Alison at 10:13 pm
Email ThisBlogThis!Share to TwitterShare to FacebookShare to Pinterest
Labels: controlling the message, Dimitri Soudas, media, social media, Stephen Harper, Youtube

"The site -- found online at www.youtube.com/Talk-Canada -- also lets visitors post a question to the prime minister. Visitors can then vote on the question they'd most like Harper to answer.

That is TOO funny! I'd love to see him answer those questions. Plus, I love the way the questions reflect the absurdity of the exercise.