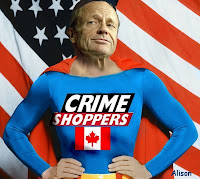 Yesterday's Con memo: “Let’s be clear, unlike the Liberals, we do not use statistics as an excuse to ignore Canadians’ concerns about crime. As far as our government is concerned, one victim of crime is one too many.”

Quite so. At Tuesday's presser, Doris addressed :

"crimes like home invasion with aggravated assault, which has to be one of the most grievous types of crimes you can think of, people’s houses being broken into and people, in many cases, senior citizens, being grievously assaulted"

Break and enters were at their lowest level in 40 years, dropping by 9%.

Day continues on about home invasions :

"...previously there were too many cases when those were addressed with what’s called conditional sentencing. That means the criminals in that case get sent home. They don’t have to go to jail."

John Geddes at Maclean's asked Day's office for material supporting his statement about conditional sentences. Amusingly they sent back StatsCan data that refutes their position :

"So far, they have only passed along the broad Statistics Canada data on criminal courts, which shows that 4.4 per cent of adult criminal convictions result in conditional sentences. There’s nothing in the data that I can see, though, to shore up Day’s version of reality."

Just another day in Day's version of reality.

Just think how much crime we could prevent by putting 9.5 billion into substance abuse programs and mental health care.

The stats that the Cons hate so much show that the vast majority of inmates have been abused as children, have substance abuse problems and/or mental health issues.

20% of US inmates are sexually abused, 16% suffer mental illnesses and another 16% are kids under 18. About half a million are inside on drug offences alone. Of the 700,000 released every year, more than half return within three years...