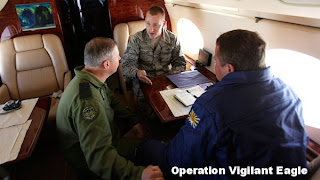 Dimitri Soudas, yesterday : "Two CF-18 fighter jets were scrambled to intercept Russian bombers that came within 55 kilometres of Canada’s Arctic territory, just as Prime Minister Stephen Harper prepares to make a high-profile visit to the region."
Oh noes ... Steve in danger ...
Last year it was Obama who was in danger :

"On the eve of Barack Obama's visit to Ottawa, a Russian jet approached Canada's Arctic air space and had to be turned away by Canadian warplanes, Defence Minister Peter MacKay said Friday at a news conference on Parliament Hill.
Two of Canada's CF-18 fighter jets were scrambled ..."

And just last month Airshow MacKay did his bit to resuscitate an event that happens monthly in the Arctic into a new Red Dawn :

"Two CF-18s were scrambled to intercept two Russian military planes 463 kilometres east of Goose Bay Labrador. "This was a message, clearly, to them that we will have CF-18 fighter planes there to greet them every time."

Meanwhile back in the real world ....
The Aug 10 photo above shows Russian (on the right), Canadian (on the left), and US personnel flying over the Pacific Ocean while participating in Operation Vigilant Eagle, a joint hijacking simulation exercise employing fighter jets and civilian air traffic controllers from all three countries that has been planned for three years.
The three day exercise, according to NORAD, was "designed to establish clear communication processes that would allow the forces to work together during a real crisis."
A real crisis, mind you. Not a fake-a-loo $9-billlion-plus no-bid contract F-35 fighter jet funding crisis.
Earlier this year NATO announced the Cooperative Airspace Initiative :

NATO and Russia have begun a testing phase of a joint system for air traffic coordination. The system focuses primarily on the fight against terrorism and will provide a shared radar picture of air traffic and early notification of suspicious air activities.

Joint air traffic coordination?
Where's the fun in that?
Let's give the last word back to the PMO's Dimitri Soudas today, who is presumably still dodging a summons to appear before the Ethics Committee :

"as the new, highly capable and technologically-advanced F-35 comes into service. It is the best plane our Government could provide our Forces, and when you are a pilot staring down Russian long range bombers, that's an important fact to remember."

"Both Russia and NORAD routinely exercise their capability to operate in the North. These exercises are important to both NORAD and Russia and are not cause for alarm."

It is not easy to justify a lot of weapons systems, and the F-35 is a very expensive piece of equipment, but trying to whip up fear of Russian bombers is simply silly.