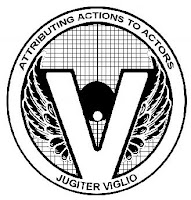 WikiLeaks' mandate is to make public those documents purposely hidden by information gatekeepers. Their goal is justice through transparency and, as Julian Assange recently put it : "I enjoy crushing the bastards".
.
At the other end of the scale you have snitch hackers like Project Vigilant - logo on left. According to Andy Greenburg at Forbes, the 600 member organization "monitors the traffic of 12 regional Internet service providers and hands much of that information to federal agencies." Its roster includes members from NSA and DARPA.
.
Project Vigilant Director Chet Uber announced yesterday that he was the guy who convinced one of PV's researchers, the hacker Adrian Lamo, to inform the federal government about Bradley Manning's alleged part in leaking to WikiLeaks the U.S. Apache helicopter footage of the killing of civilians and two journalists in a Baghdad suburb -what we now know as the Collateral Murder video -after Manning spilled his guts to Lamo in an online chatroom.

"In June, Uber said he learned from Lamo's father that the young researcher had identified Manning as the video's source, and pressured him to meet with federal agencies to name Manning as Wikileaks' whistleblower."

It was Uber who then contacted the U.S. Department of Defense and the U.S. Air Force Office of Special Investigation on behalf of Lamo.
.
What an amazing coincidence, eh? - that 22 year old intelligence officer Bradley Manning should happen to spill his guts to a member of Project Vigilant in a chatroom .
.
But how can Project Vigilant(e) legally harvest info off the internet about the rest of us?

"...because the companies (the Internet Service Providers, or ISPs) included a provision allowing them to share users' Internet activities with third parties in their end user license agreements (EULAs), Vigilant was able to legally gather data from those Internet carriers and use it to craft reports for federal agencies.

A Vigilant press release says that the organization tracks more than 250 million IP addresses a day and can "develop portfolios on any name, screen name or IP address."

So although there are some safeguards on what info the US government can collect about you - remember the stink about TIA and TIPS? - a private sector organization like Project Vigilant can take over that job for the government.
.
In the comments below the Forbes article, Chet Uber takes issue with Greenberg over his use of the word "employee" to describe the Project Vigilante "volunteers", and says "BBHC Global (which certainly has an interesting website ) is an NGO classified as a "Not Just for Profit" entity".
Uber is also a founding member of InfraGard. According to its website, IfraGard :

"is a partnership between the FBI and the private sector. InfraGard is an association of businesses, academic institutions, state and local law enforcement agencies, and other participants dedicated to sharing information and intelligence to prevent hostile acts against the United States"

What absolutely amazes me here is that a lot of people went absolutely ballistic when WikiLeaks revealed to them what their governments are up to, and yet it's apparently just fine with them when the info goes the other way and government surreptitiously outsources the collecting of private information about them .
Their motto seems to be : Knowing about your government - bad; your government knowing about you - good.
This is surely the total acceptance of living in a surveillance society - when you are willing to defend not only that surveillance, but your own complete ignorance of what it consists of.
.
Meantime best have another look at that end user licence agreement you signed with your ISP.
.
Update tonight : Greenwald : Project Vigilant and the government/corporate destruction of privacy
.
Thursday update : Greenwald : Re-visiting Project Vigilant

"... it's far more likely than not that Uter (sic) is basically engaged in a self-aggrandizing, attention-seeking campaign (not unlike Adrian Lamo), and thus, to put it mildly, is seriously hyping the importance of his group and what it does.
In sum, the dangers of the growing private surveillance industry and its increasing commercial relationship with the U.S. government are every bit as real and severe as I described. But "Project Vigilant" is probably not an example of that."

Nonetheless, as Gabriel says in comments below about Uber : "a man who claims to specialize in identifying "bad actors" is responsible for Lamo betraying Manning."
Or is at least pleased to identify himself as such. Looks like that claim from Uber may be bs too :
Former agent alerted authorities in WikiLeaks case
.
Posted by Alison at 9:26 pm
Email ThisBlogThis!Share to TwitterShare to FacebookShare to Pinterest
Labels: Adrian Lamo, internet spying, Julian Assange, privacy, Project Vigilant, WikiLeaks

What, they couldn't summon sufficient eternal vigilance not to have a spelling mistake in their own logo?

OMIGAWD You're right!
Also I was amused to learn that in his spare time, the head of BBHC Global sells Amway.
"Blond. James Blond."

Lamo's story just smells fishier and fishier, eh? I presume our boy Julian is already on this one ... ;-)

Alison: It's pretty much a given by people in the know that Chet Uber is living in his own mind and playing CYBER SHOCKWAVE with his friends, while avoiding anything serious. However, the most interesting part of the entire story is, for me, the fact that a man who claims to specialize in identifying "bad actors" is responsible for Lamo betraying Manning. I see the destruction of Manning's life as a side-effect of Uber's willingness to gain publicity, and believe me, this isn't the first time he's followed some twisted ethics for the same purpose

Thanks, Gabriel. I seem to have been following you around. See update above.

The whole beating the boy because he was acting like a girl is nothing new, and it's just going to be more reason for the justice system to pick the man's brain apart and find every sociopolitical reason why he felt it necessary to beat the child to death which in turn will give the media a total buffet of gratuitous ramblings about NOM and Gay Agenda's and what else have you instead of focusing on the problem which ultimately is a child has been beaten to death...AGAIN.