Privatizing the Afghan adventure with the NDS 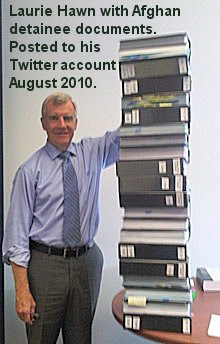 Given that the NDS, the Afghan National Directorate of Security, is "probably one of the better institutions in Afghanistan", is there anything the Canadian government could do to facilitate Canada's private sector helping them out with equipment and mentoring?
This was the question put by Parliamentary Secretary for National Defence Laurie Hawn to the Afghan Ambassador last Wednesday in the Afghan Committee Oct. 20, 2010.
Sure, answered the Afghan ambassador, there's a future role, especially since "there is already good co-operation between CSIS and the NDS".
An quick NDS refresher follows, although I recommend a much more complete one from Pogge :
Up til 2009, the NDS was entirely funded by the CIA.
Richard Colvin, at a 2007 interview in Ottawa with government officials:
"You know the NDS tortures people – that’s what they do.”
Hawn said on CBC in March : "Our detainee arrangement is the new gold standard". However the US State Dept 2009 Report on Afghan Human Rights states:

Despite the Con's unflagging official support for the NDS as a "security partner" since they claimed to have "fixed" the agreement under which detainees are transferred to the NDS three years ago, not to mention Airshow MacKay's constant mantra that "there isn't a single shred of evidence" to support the possibility that any prisoners transferred from Canadian custody have ever been mistreated, a secret internal government memo, courtesy of the CBC, "circulated at the highest levels of government" in 2009 tells another story :

The notoriously brutal Afghan Security Service, the NDS, did not change its ways after the new agreement. It is still "organized according to a Soviet KGB model. Considerable scope for improper methods entails a degree of risk to Canadian interests. "

G&M, Sept 20, 2010 : "A member of Afghanistan's notorious intelligence service boasted to Canadian military officers in the spring of last year that his organization was able to “torture” or “beat” prisoners during the course of its investigations, federal documents say."

Responding to a parliamentary motion to force the Cons to turn over the secret Afghan detainee documents in December 2009, the Cons boycotted the Afghan Committee and two weeks later shut down Parliament altogether. In an effort to come to some agreement in the spring to stave off an election via a non-confidence vote, the Cons, Libs, and Bloc each agreed to appoint an MP to a special panel to look into allegations of NDS torture of detainees and filter those results back to Parliament. Hawn is the Con's designated filter.

Four months later we've yet to hear word one about NDS torture from that panel but here's Hawn on the Afghan Committee shilling for private Canadian business partnerships with the NDS for after the 2011 pullout.

Edited transcript of the Oct. 20 Afghan Committee exchange between Laurie Hawn and the Afghan ambassador, beginning approximately at the 40 minute mark :

"Fundamental to a democracy is the justice system. We've got a huge capacity in the private sector in this country for capacity building and training and mentoring and whatever. We heard in Kabul in June from the Afghan Independant Human Rights Commission that, you know, the NDS is far from perfect but how much better they are than they used to be and the fact they are probably one of the better institutions in Afghanistan.

Could you comment on what Canada could do -you're very familiar with our private sector and how we operate - with, like, providing something for the NDS to get them to that next level where they can be a solid part of a functioning justice system?"

Afghan Ambassador Jawed Ludin responded that there was indeed a role for Canada to support the NDS because the "Afghan National Army and Afghan National Police already receive multi-billion dollar support from the US" :

"We would like Canada to focus on areas where their support can be tangible -the NDS is one such institution. There is already good co-operation between CSIS and NDS. If there is interest in pursuing any such role in the future or support to security institutions, that would definitely be one area, not just technical skills but also management support. It is important they receive support as an organization."

"We've had people come to us about flying training proposals and other proposals. Have you had any contact with the Canadian private sector about specific capacities or capabilities? Would there be things that you could bring to us to say look it, why don't you, Canada, Government of Canada, go and talk to these guys and maybe find a way to help?"

War is a racket.
.
Posted by Alison at 5:39 am
Email ThisBlogThis!Share to TwitterShare to FacebookShare to Pinterest
Labels: Afghan Committee, Laurie Hawn, NDS, privatizing war, torture, war is a racket

War is a racket.

And the innocent civilians killed in wars are the battered balls found around the court . . . .