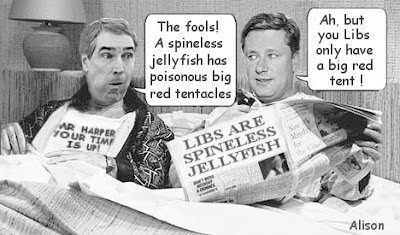 was Kady's description of the two Libs on the Ethics Committee, Wayne Easter and Carolyn Bennett, who declined yesterday to vote for an NDP/Bloc motion upholding the supremacy of parliament over the whims and contempt for parliament favoured by the Cons. Instead the Libs opted for a "study" by the Procedures Committee to be tabled some time before March 31, 2011.

Particularly galling is the fact that Easter has led the charge in this committee since May for the right of committees, as the extension of Parliament, to call what witnesses they require for their investigations. But when it came to the actual vote on it, Easter totally caved :

"Do we push this motion through to Parliament and have the Speaker rule, as has happened on the Afghanistan affair?"

No, he explained, because he didn't want to "provoke further animosity" or "inflame this issue."

"I think we here on our side, the Liberals, are willing to try one more time to see if there is good will on the part of the government to make the system work and allow committees to function as they are supposed to be able to."

and then he opted to give them till March of next year to come up with that goodwill.

"What," asked NDP Bill Siksay who tabled the motion, "will happen to all the other committees now?"
Indeed.

The Ethics Committee membership is a Con chair plus 5 Cons, 3 Libs, 2 Bloc, and 1 NDP.
The Proc. Committee has exactly the same balance of membership so it's quite possible come March that we will see a further demonstration of Con/Lib coalition solidarity for contempt of Parliament.
.
The G&M waxes ludicrous on the notion that a motion in the House in support of the supremacy of parliament would immediately lead to an election.

Do you have a link for your quotes?
I haven't seen them anywhere else?

The Ethics Committee link in the post will take you to their page, then click Meetings in the sidebar.
Audio only this time, no transcript up yet.

useless, useless, useless
Do the Liberals really think there will ever be an expression of "goodwill" on the part of the Conservatives?
The short version of the Liberal strategy here seems to be "maybe if we lay very, very still while Harper cuts our liver out it won't hurt so much"