They hate us for our freedoms

Also not at all keen on how we bulldoze their villages and orchards. 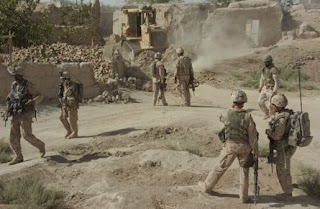 "Three years ago, Canadian troops built a temporary post near Lora in Panjwai.
When they immediately came under fire from insurgents, they bulldozed much of the hamlet, flattening houses, water pumps and surrounding orchards, the villagers and local elders say.

“There were 10 families who had houses there that were totally destroyed, and mulberry trees were taken out by their roots,” Mr. Hamid said in a recent interview in Kandahar city. "They destroyed all these things, and we are unable to replace them."

Just one of three bulldozed villages in Panjwai, Kandahar.
Unfortunately the focus of the NYT article is on the difficulties faced by incoming US troops in overcoming the Canadian/NATO 'legacy' in Panjwai and it neglects to explain why the villages were bulldozed.
. 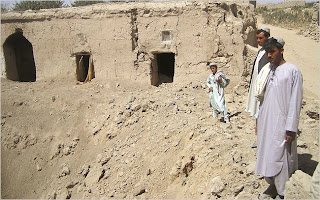 NYTimes, January 2007, via me :
"The road that cuts through the heart of Panjwai district here tells all that is going wrong with NATO's war in Afghanistan.

To fight their way into Panjwai district and clear it of Taliban insurgents, NATO troops bulldozed through orchards, smashed down walls and even houses, and churned vineyards and melon fields to dust.
Reconstruction projects were planned, but never materialized. Now NATO countries are championing the thoroughfare as a $5 million gift to local people."

The old road, you see, "twisted and turned through the hamlets and walled farmsteads."
"The military needed a straight road", explained the acting military commander of the Provincial Reconstruction Team.

"Displaced and buffeted by fighting since May, the Afghans are homeless, fearful and far from being won over. They say the road was built for the troops’ benefit and forced on them, at the cost of their land and livelihoods.

“We are compelled to be happy about the road,” said Hajji Baran.

So now it's nearly four years later. Did we ever get around to compensating those farmers for the loss of their villages, homes, crops, and livelihood so the military could have a straight road?

"Press officers for Canadian forces, who have led operations in Kandahar Province for the past four years, and the Afghan district administration said they could not confirm the destruction.

... a public affairs officer with the Canadian Expeditionary Force Command in Ottawa wrote by e-mail that she had no information to support the allegations that Lora was bulldozed.
But she acknowledged the existence of an "austere platoon house" in the area, which Canadian forces upgraded to a substation for the Afghan police in the spring of 2008. It was dismantled in the fall of 2008 "because of changing operational priorities," she wrote.

“Should locals have concerns, we encourage them to come forward,” she wrote.

We 'found' the building, you see, and we fixed it up, and when we didn't need it anymore, we 'dismantled' it. Orchards? What orchards?
.
From 2007 to 2010 : Plus ça 'changing operational priorities'.
.
Posted by Alison at 1:00 am
Email ThisBlogThis!Share to TwitterShare to FacebookShare to Pinterest
Labels: Afghanistan, war on terra

I've mentioned before that the problem in Afghanistan is war itself. Nothing will work there as long as the shooting continues.

It is simply matchless theme :)