Bootlicking on the Ground 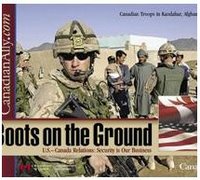 "Canadian Troops in Kandahar
Boots on the Ground
U.S.-Canada Relations: Security is our Business"

This is the banner sponsored by the Canadian Embassy that was posted in Washington DC Metro stations.
Note the insert with the conflated US and Canadian flags, and also the plug for the CanadianAlly.com website.

Under the familiar Government of Canada logo, Canadian Ally explains their mandate:
"CanadianAlly.com is an electronic newsletter maintained by the Canadian Embassy in Washington, DC, designed specifically for an American audience. The intent is to give American citizens a better sense of the scope of Canada's role in North American and Global Security and the War on Terror."

I see the Saddam Hussein Ally, Mujahideen Ally, and Taliban Ally websites have been down for some time now.
Posted by Alison at 11:03 am
Email ThisBlogThis!Share to TwitterShare to FacebookShare to Pinterest

Hey, I put the chain link fence with barbedwire on top around my property long ago. You bet all my visitor has to show more then their passport. About time the rest of the country caught up. Stephen Herpes is my kind of, er, ah, man.

I don't mind showing a passport, it being told that as a journalist I need a special visa if I want to write about anything I see.
http://dir.salon.com/story/news/feature/2004/06/15/foreign_reporters/index_np.html
that and the fact that Canadian Tax money is being spent on this PR campaign to cuddle up to reactionary morons in the US who think anyone not wearing a US military uniform, or carrying a GOP membership card and a bible is a second class human being or that Canada, being partly french, is somehow an enemy since we didn't want to invade Iraq