A day on the lake - Priceless 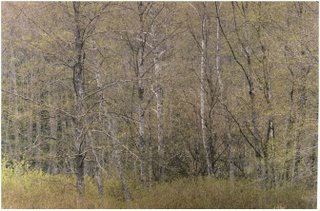 Rowed around the lake yesterday.
The leaves on the trees are still small and bleary against the still visible greys of winter. Here, these are called "weed trees".

From CBC, back in November, via Vive Le Canada :
"Canada's boreal forest provides clean water and a stable climate worth billions of dollars, says a report released Friday. The document estimates the annual value the forest creates through purifying water, regulating climate and generating oxygen is about $93.2 billion. That's twice the total market value of forestry, hydro and oil and natural gas activity, says the report commissioned by the Canadian Boreal Initiative.

Ignoring the value of Canada's boreal wealth to the well-being of the nation is akin to Exxon Mobil ignoring the volume of oil and gas reserves and annual production in its annual report," says the report. "
Posted by Alison at 10:40 pm
Email ThisBlogThis!Share to TwitterShare to FacebookShare to Pinterest

besides it's role with the oxygen and nitrogen thing, the cambium tissue was actually used as a food (you know, back 'in the days'), and the bark was used as a dye for buckskin. it's great to smoke salmon with.

alder is good to burn in woodstoves, even though we see all the big and mini-me developers here burn it all in piles, and is used in cordwood construction. this 'weed' is a friend of ours as well as Mother Earth's/

Alison are you trying to suggest that the alder swamp around Killarney Lake is in the boreal forest? Sorry darling it's the ecologist in me speaking up here. We are smack dab in the middle of the Coastal Western Hemlock biogeoclimatic zone.

The hemlocks, alder, and cedars will be disappearing from around here(and you can see this already happening) because of climate change.

No, slowgirl, just sloppy writing. The only connection was me reading about it while paddling. But even the alders are doing the job, right?