Paving the way for stuff 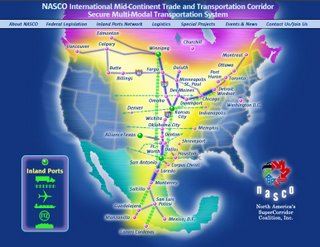 According to their website, NASCO is "a non-profit organization dedicated to developing the world’s first international, integrated and secure, multi-modal transportation system along the International Mid-Continent Trade and Transportation Corridor to improve both the trade competitiveness and quality of life in North America."
For "quality of life" here, read "stuff".
Expanding the wealth and power of corporations at the expense of people and the environment.
A ten lane corridor almost a quarter of a mile wide with gas, oil, electricity, and water pipelines running up either side, extending all the way from Mexico to Winnipeg.
Containers from the far East to be offloaded at Mexican deep-sea ports and transported by truck to the new $3 mil Mexican Customs Office - in Kansas City!
Texas has already been given both federal funding and the go-ahead to begin their section of this toll-road, and the second "Hemispheria" summit to discuss this project was due to happen in Winnipeg earlier this month.

What could possibly go wrong?

"Hemispheria" was cancelled due to security concerns, over the objections of the mayor of Winnipeg and the (so far laughably small) Winnipeg arm of NASCO, after the Manitoba government evidently deemed the $8 mil cost of providing security for the expected 600 CEOs and US governors to be prohibitively expensive.
So the real issue is profit vs security then?
No. The real issue is profit and their security, how to free up the movement of capital while simultaneously controlling the movement of people.
Terror! Terror! Terror! is merely one way of getting us to agree to it.
We haven't yet, but they'll be back.
Posted by Alison at 12:05 am
Email ThisBlogThis!Share to TwitterShare to FacebookShare to Pinterest

Are we under more threat from terrists, or from the American solution to terrists, which seems to be taking Canada over for our own good? On account of us Canadians being so naive and all, eh?

It's just the usual strategy any Risk player can understand. Just appropriate the neighbours north and south. Take over everything and pile your armies at the bottlenecks. Nice *big* armies built on the continent wide resources.

aka, it's so NOT too late to be a colonial empire.

At least they managed to move Churchill 500 miles south and away from Hudson bay. Should cut down on the threat to life and limb from hungry polar bears.