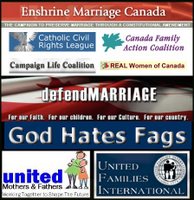 First off, our heartfelt thanks to all the lobbyists at the nine websites above for their tireless work in stemming the tide of biblical plagues and the complete meltdown of civil society which - just as they predicted - has been Canada's lot since the passage of same-sex legislation a year ago.
There may in fact be some minor differences among these groups but as I haven't been able to determine just what those might be, let's go ahead and give credit to them all as a group.

According to the Globe & Mail, Harper announced today that his government plans to hold a vote on the same-sex marriage issue in the fall. The G&M further speculates that it will not be an actual vote on SSM, just a vote on whether or not to have a vote about it. Given the new reticence on the part of many Con MPs to revisit this issue at all, coupled with the extreme fervor which a few of them will probably bring to it before it fails to pass (fingers crossed here), Laura and Dave at The Galloping Beaver both think this spells a no-win proposition for Harper even before we get into any 'notwithstanding' controversies.

I'm not so sure they're entirely right here. This announcement will keep Harper's nutter base happy for the next 3 or 4 months it will take them to whip themselves into a self-congratulatory spittle-flecked frenzy before they are roundly defeated by MPs representing the two thirds of Canada who are done with it. When the forces of reason, civilization, and yes, expediency prevail, it will not be Harper's fault because at least he tried. By keeping his promise to raise the issue, Harper can successfully bury the whole bitter divisive mess before he has to face that next election he hopes will give him a majority. Canada will relax in her fears about him and he can still keep his nutter base.
Seen this way, it could actually be a win/win proposition for him.

It's the rest of us I'm worried about.
Bush has also just announced he will try for a constitutional ammendment to get SSM banned in the US this year. Many of the groups listed above are only branch offices of their heavily financed rightwing US counterparts anyway, who will now most certainly morph into one united continental christer echo chamber. We haven't had to deal with the full force of that up here before.

So I think the real issue here is - Is Canada up to facing them down?
Posted by Alison at 11:30 pm
Email ThisBlogThis!Share to TwitterShare to FacebookShare to Pinterest

What is it that moves people to such militancy over gay rights issues, specifically now same-sex marriage?

Outraged 'Christians' are stepping over homeless people on the street to wave placards decrying the decline of society should gays gain the right to marry. Wagers of impassioned letter writing campaigns against gay marriage have never picked up a pen to contact an MP or editorial page about poverty or the spread of AIDS in Africa, or spousal abuse.

Just imagine the incredibly productive noise these voices could make were they directed at an issue that really would positively affect the evolution of society.

The sad thing is that not so many years ago if you saw someone helping a homeless person, they probably were a christian and they probably wouldn't mention that they were unless you asked.
I miss those christians.
They're still around of course, but have been replaced in the media spotlight by "xians".

Your point is well taken, and triggered a blog blurb, which then led to me figuring out how to do hyperlinks (!) woo hoo! (In the body of a post, that is; still haven't figured out how to post a Links column...) Ta ta. C.

yup , stephen al harpa is the terrorist....i put a post up about it, but, i'm not meaning to take away from your usual good insight and predictions here (you know my stuff is largely gag anyways).

you're righton about timing and getting this one out of the way long before any next election.

can't wait for the zionist reformers to start shooting off their yaps and really bury themselves....will harp be able to get them under control?

Agreed that all the branchplant turfin' is extremely worrisome, on a whole lotta levels.

To CW.....was that little dig about affecting the 'evolution' of society slipped in there on purpose?

Not sure I follow your logic, Alison. I presume the reason most non-Tory supporters fear Harper is because he'll do something crazy - but if, as you argue, he actually won't do anything crazy, but instead will just placate the nutters in his base by giving their issue lip service, doesn't everybody win? SSM stays, the majority prevails, and the angry minority gets the bone thrown to them that the issue was decided fair and square.

Remember, the wingnuts of the CPC have painted themselves into a corner. They've made the issue more about the legitimacy of the previous vote than the principle of the issue itself.

The argument here seems to be that we should all fear Harper because he's outwitting the lunatic fringe by being pretty moderate. If anything that should reassure us, not scare us.

"doesn't everybody win? SSM stays, the majority prevails, and the angry minority gets the bone thrown to them that the issue was decided fair and square."

I agree with you for the short term, but what happens after that?

1)The nutter base is placated, especially when Harper tells them he'll do better next time with a majority (and who else would the nutters vote for anyway?)
The imported christer echo chamber gears up for the next election.

2)Harper appears moderate to the rest of us - after all, nothing too bad has happened yet - and consequently we all nap off.

3)Harper gets a majority next time.
All bets are off.

"They've made the issue more about the legitimacy of the previous vote than the principle of the issue itself."

The 'free vote' legitimacy thing is a crock.
The NDP sees this a human rights charter issue and will not permit their members a free vote even if all the members would vote for SSM anyway. Good for them.

I should state here that over my lifetime I've seen an increase in 'rights' and an accompanying decrease in personal freedom. SSM was not my fight but it is nevertheless a "first they came for the..." issue, so it is my fight now.

Thanks for the opportunity to be - I hope - a little clearer this time.

Then I think you seriously misread Stephen Harper. Suppose you're right, and he's just waiting for a majority so he can do all sorts of scary things. Then what? In four years the Conservative Party gets the shit kicked out of it instantly, and the Liberals returnt to power and promptly reverse whatever it was Harper saw through? Does Harper strike you as the kind of guy who following this line of thinking?

The point is, Stephen Harper is more a pragmatist than a radical. The fact he's better at managing the nutters - a group of people which, to be fair, deserve to be heard like any other, but not necessarily the right to have their way - seems to escape most of his detractors.

I really think the paranoid-left argument that "the scary part will come after the majority" is unbelievably weak. Just watch. There's nothing to worry about.

Problem is that Alison is sex id challenged. Wouldn't know the same sex if facing it on the street.

Also- whatzthis about Zionist reformers, Scout? Duz that mean me, a jewboy from way back who actually read the UN history creating the state of Israel- which btw the Arabs and Brits snorted in derision at.... you know-the partition which provided for a Palestinian state?

Not to fuss or worry, Alison and Scout. I see anon and "retep" (whose link is NOT a link) all over the blogs.
This is standard operating procedure for the right wing and the zionist web patrol.

I just heard a really stupid interview on CBC (why did we EVER want to Save it?) with a woman from the Site Institute in (where else?) Washington DC who, although she had never encountered our dear "homegrown" boys, asserted that, by virtue of lurking and skulking and misrepresenting herself on various sites, could categorically confirm that these Muslim terrorist-type people organized online.

We are constantly being watched and our rights to speak freely are increasingly being challenged. THe US equivalent of the CRTC is under pressure from legislation that would significantly curtail our access to the internet.

We have seen the enemy...

Tell you what, anon, let's just allow Harper himself to settle this difference of opinion between us in his own words.

Harper's speech to the American thinktank 'Council for National Policy'

"Canada is a Northern European welfare state in the worst sense of the term, and very proud of it."

"In terms of the unemployed, of which we have over a million-and-a-half, don't feel particularly bad for many of these people. They don't feel bad about it themselves, as long as they're receiving generous social assistance and unemployment insurance."

"The National Citizens Coalition... We're on the sort of libertarian side of the conservative spectrum...the closest thing we have to a neo-conservative party in that sense."

"The establishment came down with a constitutional package which they put to a national referendum. The package included distinct society status for Quebec and some other changes, including some that would just horrify you, putting universal Medicare in our constitution, and feminist rights, and a whole bunch of other things."

Putting universal Medicare in our constitution, and feminist rights, and a whole bunch of other things?