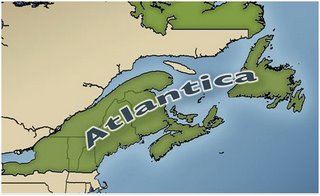 The “Reaching Atlantica: Business Without Borders” conference just wrapped up last weekend. It's an Atlantic Provinces Chamber of Commerce proposal to expand economic and political links between the Maritimes and the Northeastern US, and it kind of makes sense when you look at the map, doesn't it? Atlantic Canada plus Maine, New Hampshire, Vermont, New York state and part of northern Massachusetts.

In fact the front page of the Atlantica website states :


"After the Americans rejected Reciprocity and Confederation was born, the continent was divided into two national projects...in 1867."

If this sounds like an unusual reading of history to Canadian ears, it may be because the VP soon-to-be-President of the Atlantic Provinces Chamber of Commerce is an American and the CEO of Eastern Maine Development Corp.

And while there are many alarming references to minimum wage legislation, size of public employee workforce and “union density” as barriers to “Labour Market Flexibility” and “Public Sector Efficiency”, it is in the Atlantica Media pages that they really get down to it :


"If the vision of Atlantica could be realized, it would be a wonderful facilitator toward restoring Atlantic Canada's heritage as a thriving centre of international trade, but even better would be to integrate all of Canada and the U.S. inside one big continental economic and security zone, which would also eliminate the looming problem of American passport controls at the border which former Ambassador to the U.S. Frank McKenna estimated as potentially causing a reduction of up to 7.7 million visitors to Canada, and losses of nearly $2 billion annually - mainly from the tourism industry. The ideal solution would be a European Union-style "perimeter" that would allow Canada and the U.S. to jointly manage common external border entry points while largely dismantling internal border restrictions. Last year, an independent task force sponsored by the U.S. Council on Foreign Relations, of which former Deputy Prime Minister and Foreign Affairs Minister John Manley is a co-chair, recommended that Canada, the United States and Mexico become a single trading zone. This is so logical that it should be a no-brainer, but resistance from the above-mentioned "usual suspects" is of course a given."

I'm sorry, who were those usual suspects you mentioned again?
Ah yes, here it is :


"the usual suspects - unions, rabid ultranationalists like the Council of Canadians, radical feminists, and other fellow-traveling leftist flat-earthers"

Dear Atlantica :
While your proposal is generally well researched and adequately reasoned, in your list of usual suspects you refer to "fellow-travelling leftist flat-earthers" when the more usual designation of "godless tree-hugging Commies" would be more consistent with the rest of your material.
.
Posted by Alison at 1:16 am
Email ThisBlogThis!Share to TwitterShare to FacebookShare to Pinterest
Labels: Atlantica, Brian Lee Crowley

I heard Stephen Clarkson speak recently - he had some interesting comments about the notion of the Americas as a continental "region" - i.e., is it an embryonic EU in terms of specific variables such as trade, economy, security, etc. ? (Culture was not alluded to, but would have sauced a pretty good talk into a great one.)

Anyway, his conclusion was NO - the differences btwn NA and EU are pronounced ( don't want to clog your blog with all the details here...). SEcurity policies seem the most likely to be continentally regionalized in future. Seems to me he had a book (coming?) out on this topic (??) - he teaches at U of T - maybe a paper could be found using Google SCholar...

Otherwise, yes, the traditional east-west relationships within Canada have shifted toward north-south predominance since NAFTA, but as for borders and boundaries shifting at the whim of anti-life-affirming, antideluvian NCs, again I wouldn't underestimate the significance of culture in the whole mix (almost overlooked, but almost always the hinging factor). I don't believe cultural relationships have followed this pattern sufficiently to make a vision such as "Atlantic" feasible.

THese US-leaning agitators do seem on the rise, though. I am waiting for the backlash from the Canadian rabble to bubble up to a stunning zenith (screwing pollsters and pundits to the proverbial wall)
right on time for the next general election. Sooo... what was my point? Oh ya, although what you're reporting is disturbing, my gut tells me the glass is half-full on this one. Great, stimulating post!

good gawd. we've had the western canada/western states proponents for north/south alignment for , how long now? klein-land was the united states of alberta back in peter lougheed days, guess we just need to wrap up the prairie provinces (ontario having sold out long ago, quebec's biz culture being more u.s. style in aggression anyways).

when the u.s. started to buy up their slices of canadian safety pie it wasn't just the democrats....lots of republicans have been buying here too. what's a dem compared to a canadian left-winger anyways, too many of them are akin to our conservatives.

i'm sure there's many a good physision here supporting moves like this....their style of 'medical insurance' that may be their hope and salvation of getting u.s. wages and far less taxation that would enable them to 'stay at home'.

why are so many still missing out on diversification and obtaining more trade with the eu, china etc........how long will it be before the u.s. goes bust and we go down with it because of the ease of immediate neighbours? that's kind of a duh.

just what we need, uni-can insurgents.

OK, Q, you do realize that my posting of a gay lego pic at the top of Morality Poll Update was just for you, don't you? - given your stated preference for them in your comments on my previous post.

Still, I do sympathize.
Once you've had lego...

I can imagine it: One God-fearing Union (in the opposite sex, non-collective bargaining sense of the word), consisting of Cascadia, Atlantica and Partsinbetweenica.

But there'd still be a CFL, right?

Well, of course, Havril.
The Prairie team will be called the Partsinbetweenica Punksatawney Phillies, or 3P for short.

This waas sent to me today:

Some good leads in the footnotes, too.

"Dear Atlantica :
While your proposal is generally well researched and adequately reasoned, in your list of usual suspects you refer to "fellow-travelling leftist flat-earthers" when the more usual designation of "godless tree-hugging Commie fags" would be more consistent with the rest of your material."

BTW, re that CFR "The Task Force on the Future of North America" report in my post above that the Atlantica flackie for Irving Oil is so hot on.
I only just discovered that participant Tom Axworthy gave a dissenting view that was not published in the initial report, but is included now.

"States sometimes give up
individual sovereignty in favor of a common or joint approach because
that is the best way to solve a problem. But, in the trade-offs the benefits
must outweigh the costs. I am not persuaded that the benefits of a
common security perimeter are worth the risks in harmonizing visa
and asylum regulations. Problems in the Arar case, for example, show
the dangers. On the environment, the North Dakota water diversion
project threatens its Manitoba neighbor and ignores the 1909 Water
Boundaries Treaty. The commitment to a cleaner North American
environment must be stronger and certainly cannot wait until 2010.
Finally, I do not agree with reviewing those sections of NAFTA that
were initially excluded: cultural protection and a prohibition of bulk
water exports should remain within national, not joint, jurisdiction."

So, not a total quisling then.

It's important that the States get whatever resources from Canada they can at no additional cost. Because, well, they need it, whaaaaaa!