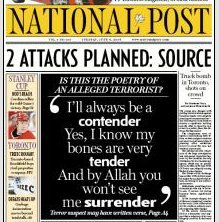 *
The National Post announced the winner of their first annual Teenage Terrorist Poetry Competition today in a dramatic front page spread designed to thrill their verse-loving readership.
In a surprising coincidence, NaPo also speculates the winning poet just might be one of the 17 alleged terrorists arrested for nearly being in possession of fertilizer and wanting to cut off the PM's head.

From NaPo :
"It could not be confirmed yesterday that the poems are the work of the same Zakaria Amara arrested on the weekend. But the poet is from Canada and there are no other Zakaria Amara's listed in online Canadian phone directories.
In one of the poems, which first appeared on the [shoot-em-up computer game "Delta Force"] website in 2002, the writer says he is 16 years old. Mr Amara is 20, and so could have been the right age in 2002."

Just one more example of the kind cutting-edge boots-on-the-ground dial-411 investigative journalism that keeps Canada informed.
Well, there was also this one. And this one.

*Sadly, no photoshopping was required in the making of this post.
Posted by Alison at 11:19 pm
Email ThisBlogThis!Share to TwitterShare to FacebookShare to Pinterest

"Is this the poetry of an alleged terrorist?"

And what if it is? What would it prove? That the accused became a terrorist because he obviously didn't have the tools for a career in literature or rap music?
Let's see some of Izzy Adler's teenage poetry and see if he's a possible terrorist.

i guess that i am sharper
for not supporting harper
arrest me, i'm a carper.

And there's this one from the CBC last night on the "As It Happens" Radio program:

BRIT TERROR RAIDS Duration: 00:06:14
Meanwhile, in London, England, police say they are still searching for evidence of a chemical bomb in a house they raided last week. Officials claim that specific intelligence had suggested the bomb might be in a home belonging to two men, and that it was to be used in an attack in Britain. The men deny the accusations. Margaret Gilmore is the covering the story for the BBC. We reached her in London.

Margaret Gilmore explained that although nothing was actually found there COULD have been 'Something' found and that 'Something' COULD have done terrible, quite horrific damage.
She also explained that shots were fired and one of the two young brothers wound up in hospital with wounds consistent with British police weapons.
Did they have a stash of stolen police guns, ready to storm Parliament? Our intrepid and unusually alert CBC interviewer detected some incongruity. He asked: isn't that just it, though? Isn't there another side of the story?
To which Ms. Gilmore grudgingly acknowledged: one of the brothers SAYS he was rushing ahead of the other down the stairs to see about the commotion at their front door. To his amazement and astonishment, he was shot at point blank range by Her Majesty's finest.
I hope this nice young man keeps his hospital bed poetry in his head. Allah only knows what London Police might do with a shred of iambic pentametre about feeling tender...