Steve and Sandra and the lighter side of torture 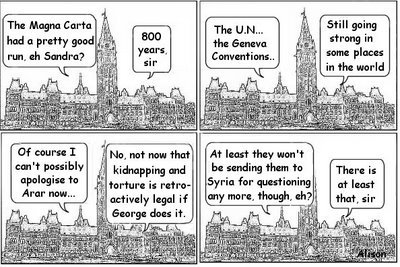 US Congress, with the help of 12 Democrats, has suspended the right of habeas corpus. Bush is now officially in the business of disappearing people without trial, and authorizing interrogation methods the UN considers illegal. In addition, immunity from prosecution is now retroactively granted to the perpetrators of all previous abuses.

In a story in the Toronto Star regarding Canada's ongoing complicity in the Arar case, there is this tragic little sidebar, with a quote from a State Department official regarding their decision to send Arar to Syria.
It reads in part :

"there were assurances that [Arar's] treatment would meet the standards of the Geneva Conventions," he told a briefing. "We had to have a reasonable expectation that he was not going to be tortured or maltreated. We were able to assure ourselves of that."

Not any more.
Posted by Alison at 5:48 am
Email ThisBlogThis!Share to TwitterShare to FacebookShare to Pinterest

Those Magna Carta guys were just living in a pre 911 mindset.

Its sad, isn't it, how afraid the Americans are these days. Reminds me of "This is the way the world ends, not with a bang but a whimper."
Earlier today, I was also reading the Rolling Stone article about the Khadl (?spelling) boy at Guantanamo -- awful, sick, painful.

I liked it better when Americans pledged their loyalty to their flag, instead of to Bush.