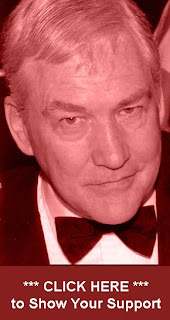 An Appeal From the Ad Hoc Committee For Conrad Black

"This web site is dedicated to the support of Conrad Moffat Black in his current battle with grandstanding U.S. prosecutors and a hostile left-wing press. More than that it is our grateful and long overdue acknowledgement of his Lordship's life's struggle to confront, with unflagging courage, the Brobdingnagian forces of Canadian small-mindedness, parochialism, mediocrity, and failure."

Werner Patels : "Conrad Black and I have corresponded on occasion on various issues, and I have found him to be a congenial and highly intelligent individual. I believe he has become the victim of a witch hunt. I will keep my fingers crossed for him and wish him all the best."

Adam Yoshida sweetly offered to send money.
From Alastair Gordon, president of Canadian Coalition For Democracies , a long and stinging indictment of Lord Black's "persecutors", ending with : "the OSC actually destroyed shareholder value when it denied the defendant's privatization proposal in March 2005."

Still others bewailed "the Stalinist practice of taking out the strong-men in a horrifying spectacle before subjecting the rest to unending and complete subservience" and how "Jesus himself was persecuted by the high court of the Sanhedrin".

The National Post publicized the website "Black described as Martyr" and Lord Black himself wrote them a gracious letter.
All in all, a rousing show of support from Canada's right wing.

And you just gotta love those endorsements from Ayn Rand and Napoleon Bonaparte on the sidebar.

UPDATE: RossK on The Backdoor Man
Posted by Alison at 2:03 am
Email ThisBlogThis!Share to TwitterShare to FacebookShare to Pinterest

Ha!
Rabble figured it out first.

we love it that his lordship managed to find time in his busy schedule fighting mediocrity to correspond with werner patels.

Ottawonk,
Wankerbirds of a feather stick together. I'm sure Werner was sufficiently obsequious to get a form letter back from Black's people, maybe even an autographed photo to gaze at adoringly (and likely one-handedly)

I don't think you can use words like Brogdingnagian around William F. without risking that he follow you home drooling all over you.
The hobgoblinization of Conrad as he would say.
Most excellent satire.

Quite a coup. Nailed the Paper Baron quite rightly. This is going to leave a mark. Good show!

What can I say?