Getting things rebranded for all of us 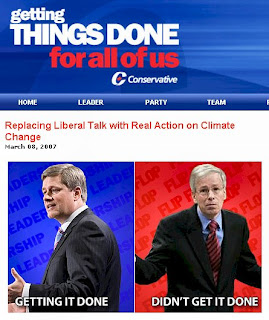 A screen shot of the website of the ruling party of Canada.
The "flip flop" background behind Dion is a nice touch.
But the best part is their headline : "Replacing Liberal Talk with Real Action on Climate Change".
How very true. One of the 'things Steve got done' this month was to eliminate the Climate Change Policy Directorate at Environment Canada after rebranding their initiatives as his own. The CCPD are the experts "responsible for implementing new policy, co-ordinating climate-change efforts among different government departments, and analyzing their potential impact."
CJOB : "The memo came just as the prime minister embarked on a national tour to announce a series of green initiatives that were largely prepared by the division now being dismantled."
Hey, thanks for the great green talking points for Steve's road trip, guys, but I reckon your work is all done now.
"The (policy) work now is being done by a very small handful of people under the direct supervision of (the Privy Council Office) and Prime Minister's Office."
Getting Things Rebranded For All of Us.
List of rebranded initiatives at CJOB
Horrible CPoC screen shot via link at Ottawonk.
UPDATE : My Blahg : Canada's Climate Change Plan
Posted by Alison at 12:04 am
Email ThisBlogThis!Share to TwitterShare to FacebookShare to Pinterest
Labels: Environment, Getting Things Done, Ripping off Ottawonk, Steve

Looks like the Tories got an "A" in the Frank Lunts class "How to Beat Your Opponents by Becoming Them - Verbally, Not Actually ".

Luntz now believes in global warming apparently. Maybe he'd like to donate some of the money he made holding up any action on combatting it to some envionmental cause.

I'm sure Sandra will certainly be more than capable of handling the issues in this portfolio on her coffee break.

I think the term apparently is an important qualifier.


A--after the entrance of Ms Penn into the race in Saanich/Isles I've done my mea culpa.

ooh, looks like our label is filling out nicely. and we totally decided to go for some incestuous cross-labelling, btw.

Ah yes, Stephen Harper and the the Gnu gov of Canada - Doing things to Canadians! Uh, I mean "for Canadians" uh, er...getting done, I mean to say "getting things done to Canadians"....uh....erm...shit, is St. Patrick's Day over already?