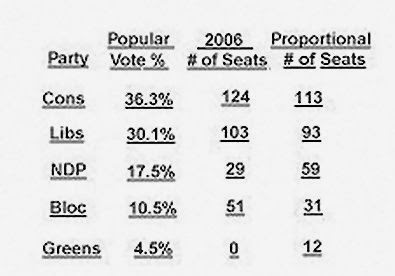 
That third column of numbers is how our government would look today if we had had proportional representation during the last election, based on the percentage of votes cast for each party in January 2006. Results? Fewer seats for the Libs, the Cons, and the Bloc; more for the Greens and the Dippers.


Back in Dec., NDP MP Catherine Bell put forward a motion for electoral reform.
Last week she expressed her displeasure with the rightwing think tank the Cons chose to oversee it :

"MP Catherine Bell has revealed in Question Period this week that the Conservative government has contracted out public consultation on electoral reform to a right wing think tank that opposes electoral reform.

In an exchange with the Minister for Democratic Reform, Bell said, “Let me introduce him to his new friends, the Frontier Centre for Public Policy, a neo-Conservative think tank against the idea of climate change. They want a private health care system. They like the idea of bulk water exports and they think trans fats are okay. Guess what? They are opposed to electoral reform. A special interest group has already hijacked the process”.

“This is cynical politics of the worst kind,” said Bell. First, the government should trust the work of Parliament’s own Committee and agree to engage in that process. But to hire a group that is publicly opposed to electoral reform is beyond the pale.” "

Gosh, who are the Frontier for Public Policy?
Their website does seem to be unusually full of global warming denial articles, but that only makes sense really when you consider that Tim Ball is on their board of the Research Advisors.
Plus there's

And many more all-too-familiar corporate shills.
Lots of interesting articles on their site too :

Go check out their website.
After all, these are the guys the Cons have chosen to guide consultations on our electoral reform process, and they report privately to the Minister and not to parliament.

Minister Van Loan defended the Con government’s contracting out the consultation process with these words:

“the consultation that has begun is one that is designed to be representative of all Canadians and is a process that will do that without allowing the process to be hijacked by special interest groups.”

You continue to impress me with your posts, Alison . . . Thanks for your insight!