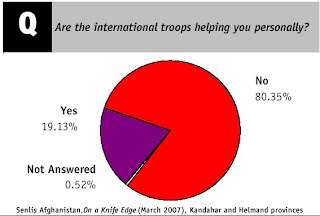 From the latest Senlis Council survey on Afghanistan.
Kandahar - that would be where our guys are.
And if you think this graphic is discouraging, consider that support for troops in US-occupied regions is running at only 6.5%.
In interviews with 17,000 Afghan men between Mar 3 and Mar 12, Senlis also found growing support for the Taliban from a people whose principal concern is their increasing poverty and difficulty in providing food for their families. 27% were willing to tell the interviewers that they support the Taleban.
In a country where the GDP per capita is less than 1% of ours and two weeks employment with the Taliban is equivalent to a year's average earnings, the Taliban also serve to protect their poppy plantations from our troops. They are, says Senlis, winning the propaganda war by meeting people's basic needs. These so-called "insurgents" have little interest in AlQaeda or the Taliban - they just want to eat.
Senlis believe international intervention in Afghanistan is vital but they argue that our emphasis on the military is a mistake. Of the $100 million Canada contributes in aid through CIDA, $4.30 per person goes to development and $140 goes to the military.
Senlis Council Afghanistan Survey pdf here. It's a very interesting read.
Posted by Alison at 7:19 pm
Email ThisBlogThis!Share to TwitterShare to FacebookShare to Pinterest
Labels: Afghanistan, Senlis

Good Survey is this gona give an idean about the afgan poverty line. kewl blog like to visit more be in touch

Ross : And yet it's received darn little attention in the blogosphere, although I see PSA at CC blogged it.
Senlis have a pretty straight-up bias - intervention is "vital" but the current form of it is fucked and those poppy crops should be bought and turned into medicine - but I'm guessing this isn't a bias that can be spun into a case for either getting the hell out or staying the course, so it gets ignored.
Yes - very important. I certainly learned a few things.
For instance, did you know both Israel and Egypt receive more aid than Afghanistan?