The head of CBC News was grilled by Con MPs on Tuesday about the use of this photo of the Toronto skyline to illustrate a story on the Kyoto Accord.

Calling the darkened stock photo "a complete misrepresentation" that had the effect of "misleading Canadians", the apparently metaphor-challenged Con MP Chris Warkenton complained in a brilliant rhetorical flourish that the photo "was there to support an opinion that was being brought forward with the article that it was published along with."

And here I'll pause for a moment to allow you to enjoy the unintended hilarity produced whenever a Con MP complains about misrepresentation of Kyoto.

CBC editor-in-chief Tony Burman answered that the photo, which was pulled as soon as the mistake was realized, was "misfiled" and "an inadvertent error" and had not been specifically "retouched for use on air".

The Cons, who have recently taken to air-brushing entire people out of their caucus, then promptly squandered whatever dubious moral high ground they might have tried to claim by whining that CBC hadn't given sufficient coverage to their fetus fetish rally on the Hill last month. Wankers.

Note to CBC : Use a bigger brush. Some Cons obviously don't get concepts like 'metaphor' and 'illustration' easily. Next time you run a photo to illustrate a story about Canada's relationship to Kyoto, I would suggest you use something clearer and more to the point. Like this one from Havril : 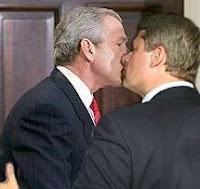 Posted by Alison at 5:12 am
Email ThisBlogThis!Share to TwitterShare to FacebookShare to Pinterest
Labels: Kyoto

LOVED the photo, Alison - the second one, that is!

I had not seen it previously - Priceless!

I think the real objection here is that the CBC is portraying air pollution as something that is inherently bad. I mean, look - dirt is just minerals, right? And a lot of people spend good money buying mineral supplements at fancy health food stores to make sure they get enough zinc and stuff, so why shouldn't we ve grateful instead of angry when a public-minded corporation takes it upon themselves to put minerals into the air for Canadians to breathe in for free. I think they deserve tax breaks, not censure and overregulation......oops, sorry, I just woke up and thought I was John Baird for a minute. And a scary scary minute it was.