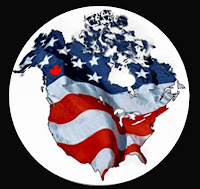 "The Plan to Disappear Canada" in yesterday's Tyee outlines ten recent developments in deep integration that have received media coverage.

As author Murray Dobbin points out : it's good that our media is finally giving it some tentative attention but it's bad that it's taken them so long to notice that The Big Idea is already well underway.

Several people have emailed it to me along with their comments, which mostly run to the "those fucking Americans" variety, and it's this idea that deep integration is someone else's fault that I'd like to address here. Specifically I'd like to hear a lot more about complicity from certain "fucking Canadians".

Mulroney gave us the 1989 Free Trade Agreement, Chretien gave us NAFTA, Paul Martin the Security and Prosperity Partnership, and Harper - Harper's knees are covered in callouses and his lower jaw has gone numb.

The 2005 Independent Task Force on the Future of North America, also a Canadian initiative, included :

who, along with their US and Mexican counterparts, variously advocated and signed off on :

And the Smart Borders and the Smart Regulations harmonization with US regs and the Fire Sale of Canadian companies.

So please, let's admit that Canadian corporations and think tanks and politicians have more than met "those effing Americans" half-way here. However horrified we may be at the idea of hitching our wagon to the stars and stripes of the war-mongering imperialistic plutocracy to the south, let's at least admit it's Canadians who are selling off our wagon.

Posted by Alison at 5:53 am
Email ThisBlogThis!Share to TwitterShare to FacebookShare to Pinterest
Labels: NAU, SPP, Task Force on the Future of N.A., Tyee

I for one have decided to completely reverse my stance on gun control because of this. Screw registering, get all the weapons we can. We may be the Indians now, but that doesn't mean we can't learn from their experience.

And if the Blogging Tories,the National Post and the Western Standard had been around in the 1870 and Sitting Bull had written a letter to the editor complaining that the lands of the Sioux were being stolen and the Great White Father in Washington was not honoring his treaties, all we would hear about was his knee-jerk anti-americanism, how he should be grateful to the bluecoated pony soldiers for protecting him from the Russians and giving him blankets and free beef.

I think I may just have to take a little road trip down to Montebello this August. Anyone wanna carpool?

In the meantime, for your amusement: