Steve and Sandra - Dressed to Kill 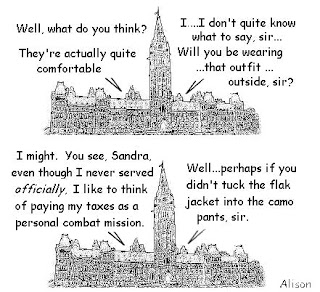 Just so we're clear here : Steve, who didn't serve in the military, went off on Dion for not serving in the military and Ignatieff for spending time in academia outside the country, because Dion called for the resignation of an incompetent Con cabinet minister who used to serve in the military.
"It's true I've never served in the armed forces," the PM admitted. "I consider that an experience in my life that I've missed. But I can say, Mr. Speaker, that I've always worked and lived and paid my taxes in my country."
As Tim put it in The Canadian President : It's really a right wing twofer for Harper. He gets to criticize people who have not served in the military (hypocritical prick that he is) and he gets to sneer at an academic. It's all good!
Got it? No? Just think of it as a more childish variation on "I know you are but what am I?"
The Galloping Beaver : Harper the warrior king, channeling Dick Cheney
Canadian Cynic : Too stupid to know they've been towel-snapped
Fixed : Oh, just about everything above. Bah!
Posted by Alison at 7:53 am
Email ThisBlogThis!Share to TwitterShare to FacebookShare to Pinterest
Labels: Now We Are Six

I love these politicians with no military service sending young people off to die for their country.